Resolution against amount of testing introduced

A small group of parents who waited through the three-hour-long Garrison School Board of Education meeting Wednesday night, Dec. 12, commended the board during public comment for addressing their concerns in a draft of the board’s long-term goals and objectives for the next few years.

Drafted by Superintendent Gloria Colucci, the board’s previous goals were mainly retained for 2012-2015, since feedback on the existing goals was mostly positive, even if there existed some argument about whether the school was meeting those goals. Colucci slightly amended the draft goals to reflect a desire, expressed by parents attending three public goals workshops this fall and the board meeting that followed on Nov. 28, for more development of critical thinking and creativity in students and improved communication between the school and the community. They now also include an emphasis on their “dedicated and experienced faculty” as an asset of the district that has produced high levels of achievement.

Many more parents’ concerns were addressed in the draft objectives for the rest of this and the next school years, 2012-2014. Colucci wrote objectives for the school administration to implement in order to meet the board’s goals, aiming to increase active student engagement and differentiated instruction (teaching and providing work to students at their individual ability levels), to further incorporate technology in classroom instruction, to improve curricula, to provide quality professional development for faculty, and to build community partnerships for better communication, among other tasks.

Parents remarked upon the extent to which their concerns were mentioned in the objectives, especially thanking the board for including the creation of “a task force to research, examine, evaluate and recommend best practices to enhance the instructional program,” as well as “a committee of community volunteers to research and implement grant opportunities and seek other sources of outside funding to enhance the instructional program and professional development opportunities,” both of which were suggested and requested by many during the public workshops. 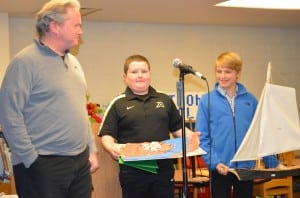 Parent David Gelber said to the board, “I think that you guys have been extraordinarily responsive to issues that we’ve raised.” He repeated his request for the board to provide childcare during their meetings so that more parents could attend, but some members said that they had tried that and other ways in the past to increase attendance with no improvement in attendance.

Another parent, Stacy Labriola, spoke effusively of the work of the teachers, administrators and board members at Garrison School, and in particular praised the new parents coming to the meetings with fresh ideas, like Gelber and Derek Dubois, who were present through the Wednesday meeting as well as many of the workshops and meetings.

Labriola suggested, however, that teachers should take turns to attend the board meetings, “just to keep informed and see that parents aren’t attacking them.” Board members mentioned that there had been teacher presence at previous meetings but were not sure why there wasn’t someone representing them Wednesday evening. Labriola ended by saying, “For the record, I love this school. It was great for my kids.”

“I commend the administration. You did a nice job capturing a lot of input,” said Dubois, who had at a workshop presented a set of recommendations drawn up by a group of parents.

During board discussion of the draft goals and objectives, board members brought up points that should be included, such as athletics and physical education, and a desire for more concrete and measurable outcomes, such as for the objectives to “identify and increase the use of varied differentiation instructional strategies in every classroom” and “identify and build community partnerships to generate improved communication.”

Colucci argued that specifying a percentage change in the use of differentiated instructional strategies would be difficult, since different teachers already use such strategies at varying levels, but that there would be an evaluation of their use by administrators in classroom observations. She also explained that the language for building community partnerships for communication was vague because those partnerships are as yet unknown.

A final draft of the goals and objectives, with changes discussed at the meeting, will be presented at the board’s next meeting on Jan. 2 for approval.

Colucci and Board Members Anita Prentice and Theresa Orlandi also presented about a superintendent and board workshop given by the Westchester-Putnam School Boards Association that they attended on Nov. 8 in Tarrytown, at which Monty Neill, executive director of the National Center for Fair and Open Testing (FairTest.org), spoke on How Standardized Testing Damages Education and What We Can Do About It. 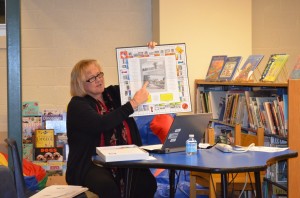 Garrison School Principal Stephanie Impellittiere shows off the newly arrived Philipstownopoly board game, a fundraiser by the Garrison and Haldane PTAs, at the Board of Education meeting Dec. 12.
Photo by J. Tao

Board members pointed out Monday’s (Dec. 10) Washington Post report that Maryland’s Montgomery County Superintendent Joshua Starr said “the country needs a three-year moratorium on standardized testing and needs to ‘stop the insanity’ of evaluating teachers according to student test scores because it is based on ‘bad science.’”

While recognizing that assessments are essential tools in education, FairTest opposes the overwhelming amount of high-stakes standardized testing that is being imposed by federal and state governments. Prentice asked the board to consider signing onto FairTest’s National Resolution on High-Stakes Testing. Board President Raymond O’Rourke said they would discuss amending the resolution for approval after first approving the board goals and objectives at subsequent meetings.

Colucci announced that parents of a high school junior and alum of Garrison School have requested that the school offer SAT preparation courses this year. The school has in the past offered SAT prep courses through Princeton Review when a minimum number of high school juniors are interested in enrolling in them, and Colucci will notify parents of the possibility of holding them again this year.