Overcoming the triple peril of poverty, war and global warming

In its 17th year, the Desmond-Fish Library’s annual Bringing the Dream Home: Civil Rights and the Hudson Valley program this past weekend (Jan. 20 and 21) once again had the aim of showing the continued relevance of the life and ideas of Dr. Martin Luther King Jr. in relation to issues affecting the Hudson Valley today. Split into adult and children’s programs, the adult program this year on Jan. 20 featured speaker Stewart Burns, a nationally recognized civil-rights historian and activist and current coordinator of community engagement at Williams College. 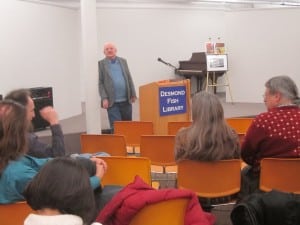 Stewart Burns taking questions after the talk at Desmond-Fish Library on Jan. 20
(Photo by A. Rooney)

Burns is the author of the biography To the Mountaintop: Martin Luther King Jr.’s Mission to Save America: 1955-1968 and a history of the Montgomery bus boycott, Daybreak of Freedom, which was then made into the HBO film, Boycott, a short clip from which served as the opening to Burns’ talk, Regeneration: Overcoming the Triple Peril of Poverty, War and Global Warming.

Burns began with what he called a spiritual and secular “benediction,” quoting first from the Bible: “Where there is no vision, the people perish,” Proverbs 29.18.

He continued with a quote from King’s April 4, 1967, speech, made exactly one year before his assassination: “The war in Vietnam is but a symptom of a far deeper malady within the American spirit. When machines and computers, profit motives and property rights, are considered more important than people, the giant triplets of racism, extreme materialism and militarism are incapable of being conquered.”

Finally, he quoted Frederick Douglass: “If there is no struggle, there is no progress. Those who profess to favor freedom and yet deprecate agitation are men who want crops without plowing up the ground; they want rain without thunder and lightning. They want the ocean without the awful roar of its many waters. This struggle may be a moral one, or it may be a physical one, and it may be both moral and physical, but it must be a struggle. Power concedes nothing without a demand.”

Burns got to his point right away in asking the question, “Where do we go from here? Chaos or community?” He stated, “King condemned these triple evils. He made a vital start, but we haven’t done a good job confronting the evil triplet, which has grown, metasticized. It’s now a four-fold peril: poverty, racism, militarism and manmade global warming — the last an incontrovertible truth now,” Burns told the audience. “Our first wake-up call is to heed and understand how interwoven the quadruple peril is.” 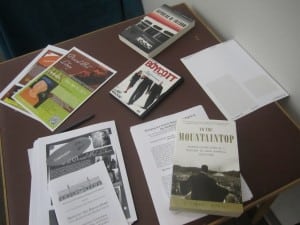 A table full of materials to peruse at the Martin Luther King Jr. Day observance at Desmond-Fish Library on Jan. 20 (Photo by A. Rooney)

Saying that King proposed a revolution, Burns would prefer to call it a regeneration of political, economic and social life and “of our morale.” Burns used Martin Buber’s phrase, “renewing the cell tissues of society.” Calling the “breakdown and paralysis of government an opportunity,” Burns said, “We need a pathway to change which doesn’t rely on government institutions; we must commit ourselves to the process of civic learning and citizenship education.”

Burns thinks we are at a critical point, a point where it may be possible to create “a new political system.” He quoted King again: “The time is always right to do it right.” Speaking of the recent, quickly formed, galvanizing forces which just led to gun-control legislation, Burns said this might be a “hint of what is possible” in other areas he sees as needing major reform, but he warned that “eliminating the poverty of the truly disadvantaged will be harder — the poverty prolonged by race and class.”

Burns sees one great hope, and perhaps the literal key to fueling major social changes, in “speeding up our reliance on natural energy sources.” By working at the local level, “building a green economy from the bottom up,” he sees an opportunity to “reverse global warming, eliminate wars over resources, and research and develop new energy technologies.” Conjuring up a “domestic Marshall Plan,” Burns envisions a “Green Corps,” a cross between the Peace Corps and the Civilian Conservation Corps of the New Deal era, working through “grassroots, participatory democracy” outside of a government mired in “gerrymandering, breakdown and the deadlock of a beleaguered democracy.” 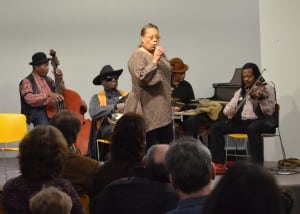 He called the current situation a “democracy split in two, antagonizing, not engaging. If only we could combine the best parts of each and expunge the rest.” He did not advocate working against the government but rather working independently and then attempting to join forces, “building alliances between two systems that tolerate, but don’t trust each other won’t be easy.”

Burns said the timing is right and that it is critical to begin now: “These are auspicious times; we have caring people in this millennial generation who can create democratic synergy … and the tools of technology can help. For now we must resolve not to miss the boat, as we did in 2009” (circa the last inauguration). Burns urged immediate action, saying that such grassroots efforts “have generated most of our social reforms over the years.”

He spoke in more detail of the times, just a few years ago, when many thought seismic changes would occur. “In 2008 Obama was elected by a true grassroots mobilization. Progressives thought we could take progress for granted. They trusted Obama, and, in awe of the election gave a charismatic president the benefit of the doubt.” Continuing an evaluation of recent social-change activism, he touched upon the Occupy movement and reasons why it didn’t take greater hold, before speaking of the time at hand now.

“With the second inauguration there is a second chance for us to regenerate,” said Burns. “We need to organize to overcome the four perils; remedy and redeem our blunders of 2009-10; or [there will be] quiescence. It is up to each of us to act; the alternative is unspeakable.” He quoted again from Dr. King, this time the April 3, 1968, Mountaintop Sermon: “And let us move on in these powerful days….” Burns proclaimed, “Now, after four decades in the wilderness our time has come — it is propitious.”

Before taking questions from the audience, Burns concluded his talk by quoting passages from Langston Hughes’ Let America Be America Again:

Let it be the dream it used to be.

Let it be the pioneer on the plain

Seeking a home where he himself is free.

(America never was America to me.)

We must take back our land again, America!

I say it plain,

America never was America to me,

And yet I swear this oath— 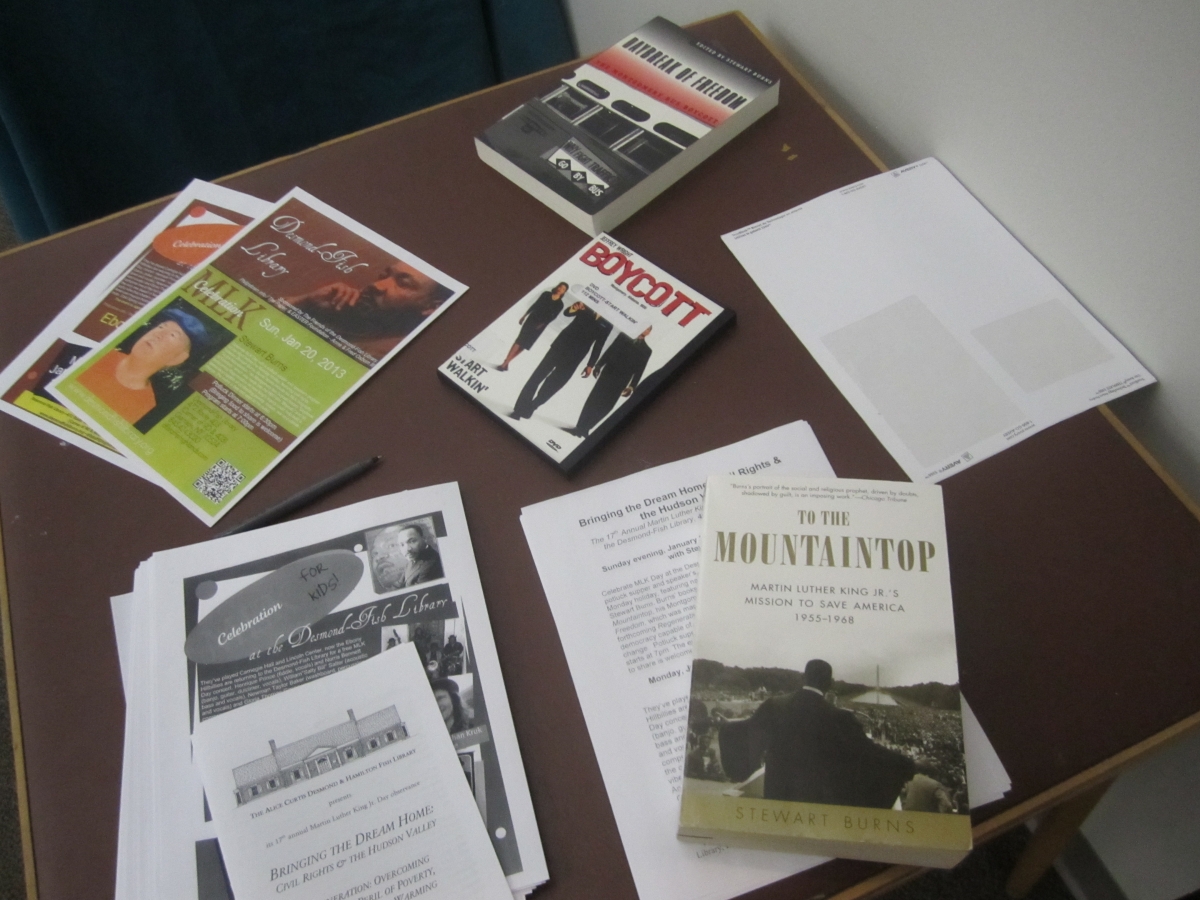 A table full of materials to peruse at the Martin Luther King Jr. Day observance at Desmond-Fish Library on Jan. 20 (Photo by A. Rooney) 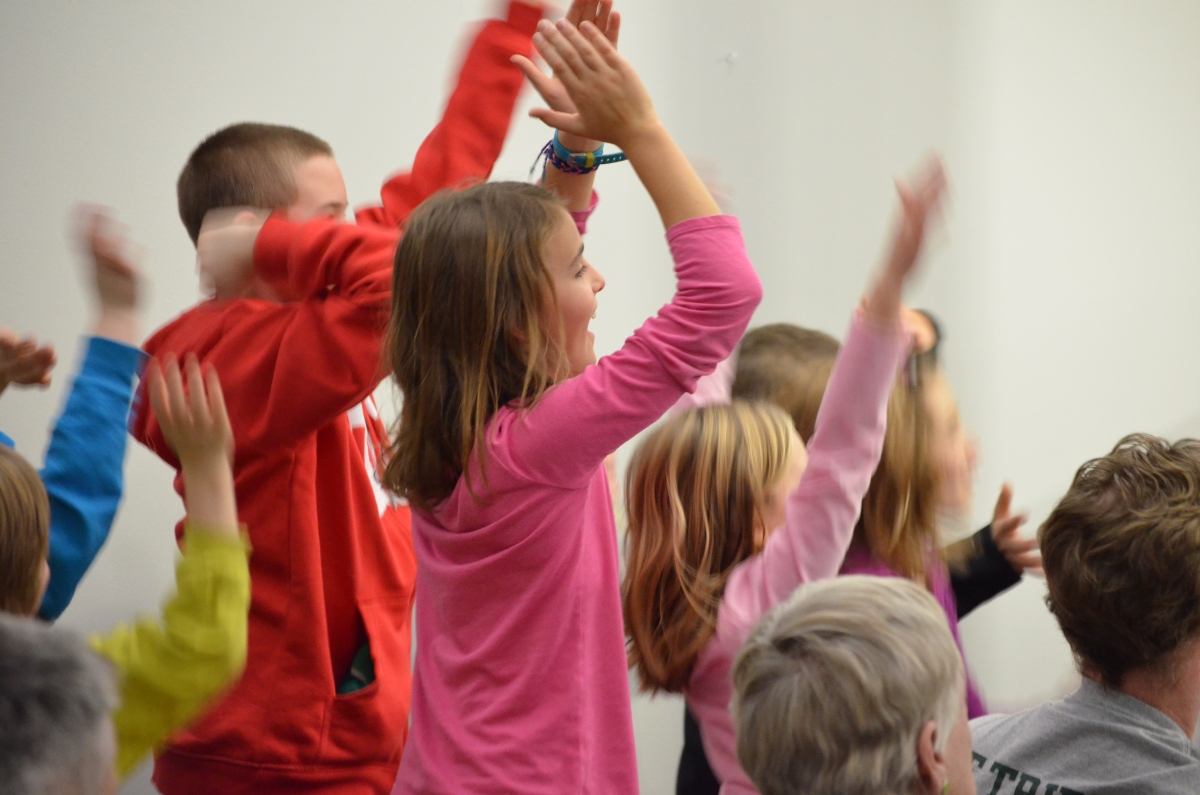 Children dance to the old-timey sounds of the Ebony Hillbillies in the Martin Luther King Jr. Day children's concert at the Desmond-Fish Library on Monday, Jan. 21. Photo by Jeanne Tao 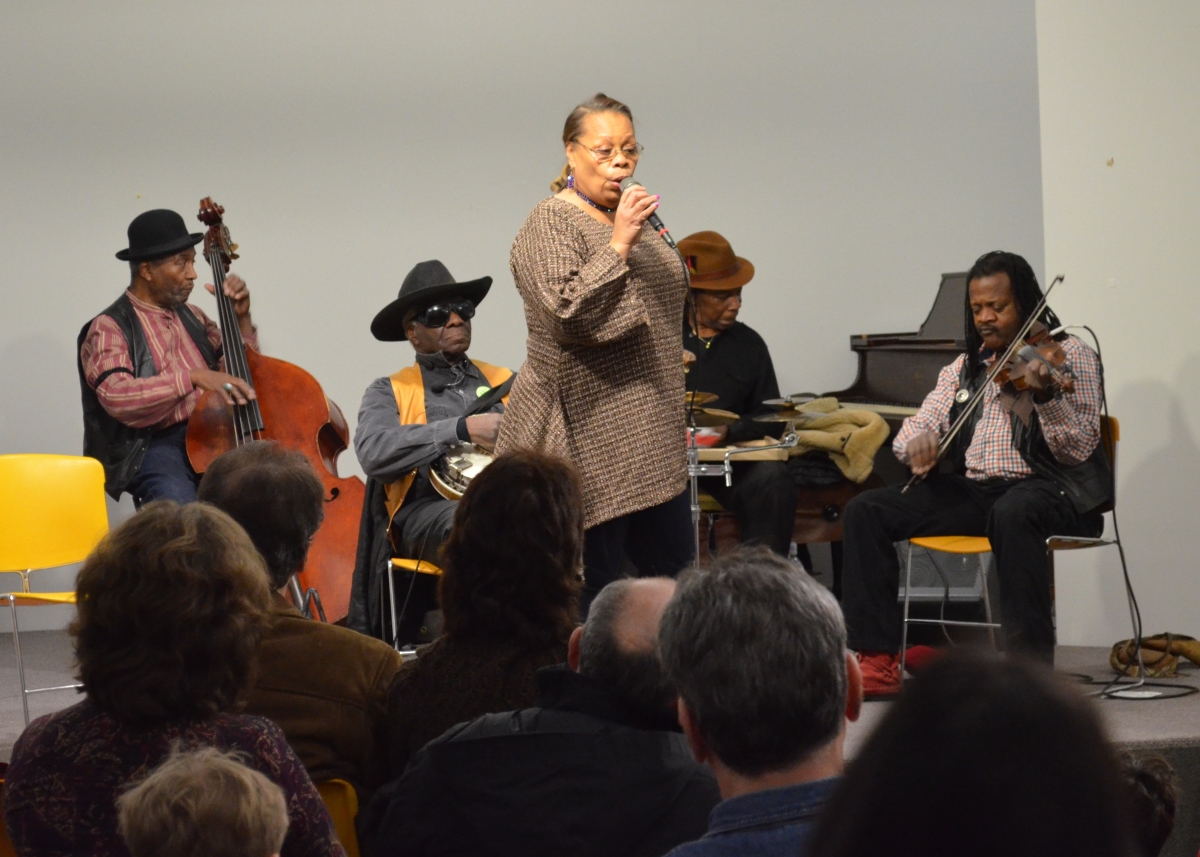 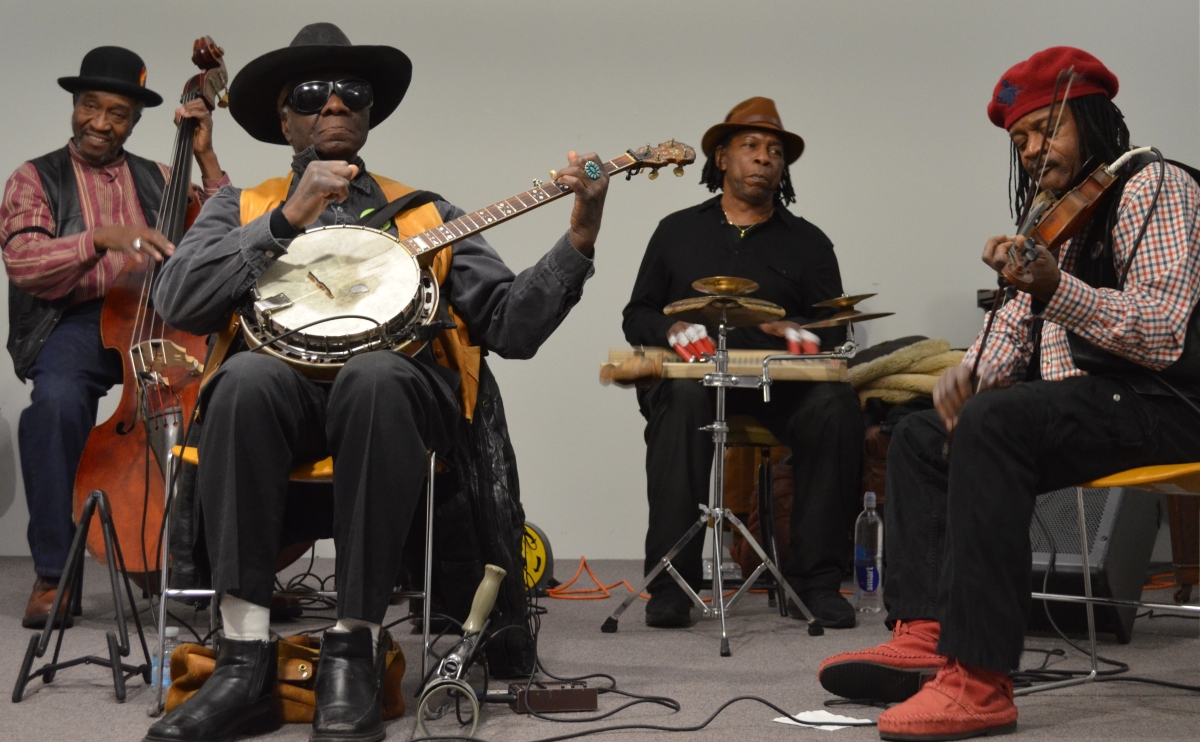 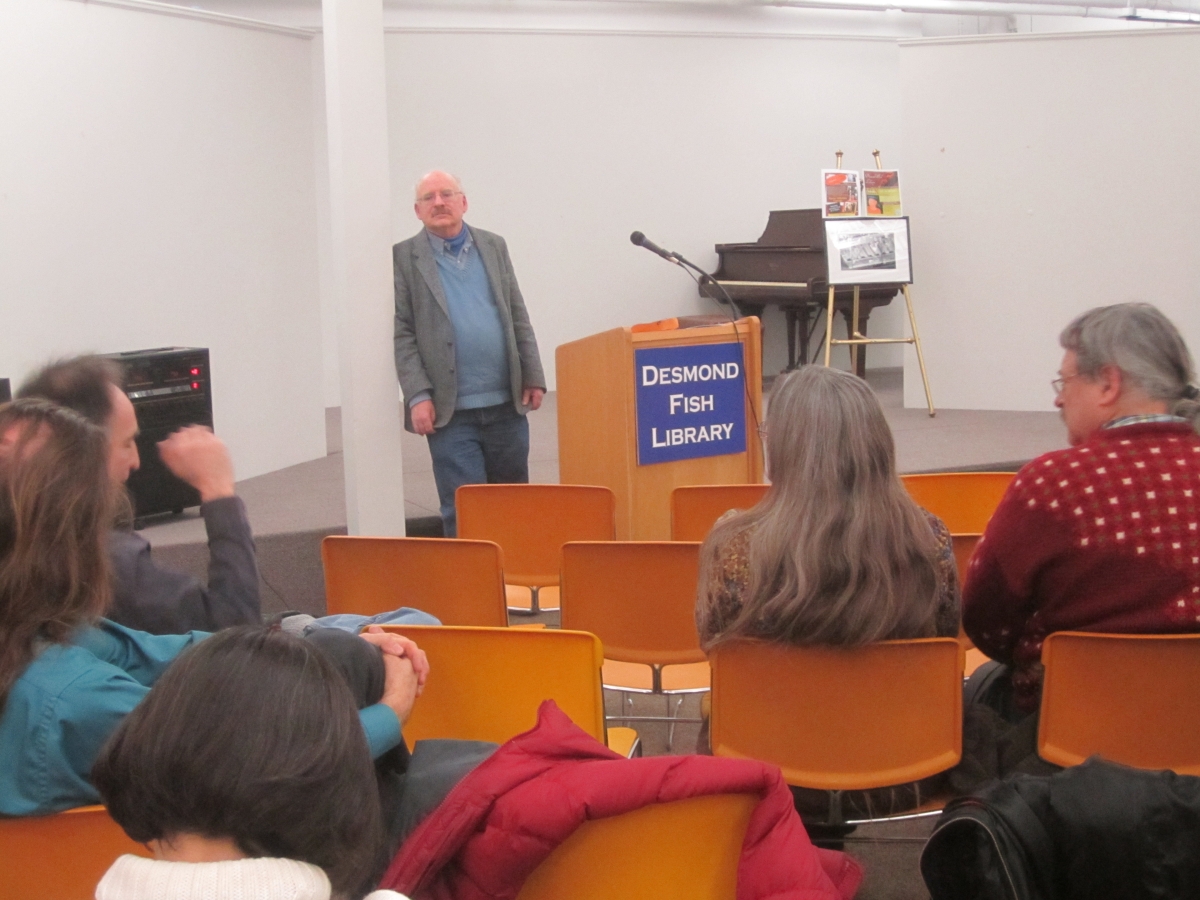 Stewart Burns taking questions after the talk at Desmond-Fish Library on Jan. 20 (Photo by A. Rooney)