One night for supper, I warmed up a pot of red beans. As I set them on the table, I said to my family, “Here’s a cool thing I learned at my last job: Red beans are one of the healthiest foods you can eat — like, at the very top of, um … some particular scale of healthfulness, I don’t remember which one. I think, maybe, actually, several of them!”

Sigh. If only my memory could keep up with my will for pedantry.

“Mom?” said Henry, in his sweet, polite way. “I don’t mean this as a criticism or anything, but you say that about almost everything you make.”

“Well …” I replied, grasping for a wise comeback, “I guess that just means I make a lot of healthy food, right?”

Peter jumped in. “I think what your mom is saying is that if you could only bring a few foods to a desert island, red beans ought to be one of them.” And at that, they veered off into a discussion of things you’d wish for on a desert island (“Skittles!” “A helicopter,” “No, a yacht,” “What about gas for it?” “What about a crew?” “You’d need an owner’s manual,” “And a map!”).

The next day, while the kids were occupied at school, I looked it up. Turns out, small red beans top the list of antioxidant-rich foods, higher even than blueberries. (The top-5 list goes like this: small red beans, wild blueberries, red kidney beans, pinto beans, cultivated blueberries.) I must admit: I love this fact. Because for the longest time, cheap, humble beans have been thought of as nutritionally prosaic, adding protein and fiber (and gas) to our lives, and not much more. But it turns out they are nutritional rock stars! In addition to the above, they’re also a good source of iron, magnesium, potassium, folate and phosphorous. 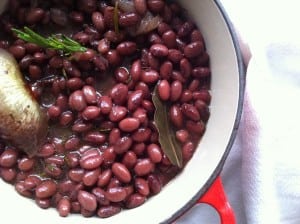 I should have known. Ever since the link was drawn between a food’s color and its healthfulness, intensely pigmented things like berries, pomegranates and kale have been hyped like miracle drugs. It never occurred to me that the color of a little dried bean might indicate the same thing.

But why not? They are stunning. The ones I buy in bulk up at Nature’s Pantry, in Fishkill (where they are called “small chili beans”), are the color of garnets. I’d been eyeing the glowing jarful in my pantry for weeks, awaiting the right day to cook them up.

With dried beans, you have to commit. Once you start to soak them, you ought to see the process through to the end. I suspect that’s the reason why more people don’t embrace them, despite the fact that they are crazy cheap and delicious: Dried beans don’t seem to fit into our instant-gratification lives.

But the truth is, beans are more tolerant than we give them credit for. My small red ones were two hours into a leisurely soak when I suddenly had to head down to Sleepy Hollow, with no idea when I’d return. I hauled out my slow cooker. Into it went chopped onion and celery, minced garlic, broth and various randomly chosen things from my spice rack including a couple of dried chilies, some coriander and cinnamon, and a lot of oregano. I wasn’t overly worried about the mix because I knew that any mistakes would be redeemed by the smoked ham hock that I also added to the pot. I put the lid on, set the timer for eight hours, and left.

The finished beans were very good — so much so that my kids would have eaten them without any nutritional browbeating, though they did appreciate the pot of buttery garlic rice that Peter cooked up to serve alongside. The leftovers were folded into a tortilla for my lunch the next day.

I would tell you how to make them, but I don’t remember. And anyway, I can’t help but feel that adding a large, charismatic ham hock to a pot of beans is sort of cheating. You can do that without a recipe, success guaranteed. Instead, I will tell you how to make a pot of beans with an Italian twist. You can decide whether or not to serve them with a nutritional lesson on the side.

You can make a delicious pasta sauce from the cooked beans, sautéing them with crumbled Italian sausage, chopped fennel and just one or two smashed tomatoes. Top with parmesan to serve. Or add chopped escarole, cooked farro and broth for a simple, healthful soup. (You can also give them a Mexican flavor, by substituting coriander, cumin, cinnamon, oregano and dried chilies for the rosemary, fennel and thyme.)

1 whole onion, sliced in half

2 teaspoons salt (or more to taste)