The Beacon Film Festival — Freeze Frame is celebrating its third year with an expanded four-day program. The festival showcases an assortment of feature films, music videos and documentaries from three HudsonValley filmmakers.

Ironbound Films, Inc. of Garrison will present its Sundance-selected, Emmy-nominated documentary, The Linguists, a film that follows two scientists’ journey around the world as they document the last gasp of languages on the verge of extinction. Cold Spring resident Daniel A. Miller, a principal at Ironbound, said, “We are thrilled to be a part [of the Beacon Film Festival]. Some of the most rewarding screenings of the documentaries we create are local.”

The Beacon Film Festival was conceived by board members of the Beacon Theatre under the direction of Christine Vittorini. Expanding its offerings each year from two to nearly a dozen works this year, festival organizers hope “that the film industry takes note that the HudsonValley is a great place to make films and a wonderful area to set up their production companies.”

Festival director Kim Elizabeth said, “We are very fortunate to have these wonderful storytellers choose to let us be their platform. The Hudson Valley has a varied and wide range of talented and award-nominated and winning artists right here. It is very exciting to shine a light on these cutting-edge films.” For the full schedule and ticketing visit thebeacontheatre.org. 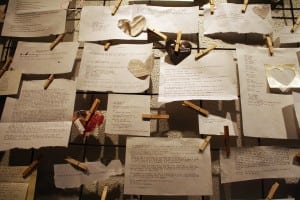 Submissions to the Love/Hate exhibit at Blackbird Attic. Photo by Michelle Caves

Shop owner Michelle Caves was inspired by to create the event by the books Post Secret and 1000 Journals. “I was already doing art shows every month but wanted to try something interactive and realized Valentine’s Day was coming up … and the Beacon community is so tight-knit and filled with different types of artists. I figured people had a lot of feelings around this time of year that they wanted to get out, whether positive or negative. This idea allowed them to do it anonymously, while possibly sparking a feeling in someone else.”

Throughout January and early February a typewriter was available at Blackbird Attic, and members of the public were invited to contribute to the show. Electronic letters were also accepted. The finale event featuring all submitted letters and art pieces will be held on Saturday, Feb. 9. Refreshments will be served. 5 – 8 p.m., free.

The Beacon Room at bau

bau gallery, 506 Main St., announces the opening of The Beacon Room, a project space within bau gallery dedicated to showcasing the talent of established, mid-career and promising emerging artists living or working within the community of Beacon and surrounding towns in the Hudson Valley.

To inaugurate The Beacon Room, bau presents the work of Beacon artists Bo Gehring, Katie O’Hagan and Rieko Fujinami, three finalists from the Outwin Boochever Triennial Portrait Competition 2013 held by the Smithsonian in Washington, D.C. The works will be part of a major exhibition on view at the National Portrait Gallery from March 23, 2013, until Feb. 23, 2014.

Other art openings and receptions 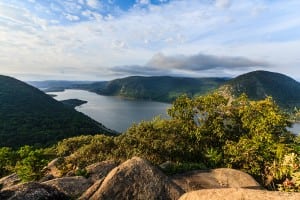 RiverWinds Gallery, 172 Main St., presents Intimate Landscapes, photographs by local artist and conservationist Robert Rodriguez Jr. “Robert has an eye and a technique that captures the beautiful essence of nature,” said Linda T. Hubbard, photographer and co-owner of RiverWinds. “When I see his work, there is a part of me that is transported into the calm quiet of the land. His new images are awesome.” Opening reception 3 – 9 p.m., free.

Beacon Yoga, 464 Main St., will host two programs during the afternoon of Second Saturday. First, it will present The Way of the Heron: The Roots of Non-Violent Activism and Conflict Resolution in Native American Culture, a lecture and workshop focused on the history of an Algonquin Indian tradition called the Way of the Heron, a practice that led to much of what is called “activism” today.

According to presenter Evan Pritchard, two Penobscot men taught “the Way” to Henry David Thoreau, whose writings passed it on to Mohandas Gandhi, whose successors taught it to Dr. Martin Luther King Jr., who shared it with the world. The workshop portion of the program will focus on making wise agreements a key to preventing conflicts in the future. 11 a.m. – 2 p.m., $15 donation.

Later in the afternoon, Nada Khodlova will lead a Sacred Circle Ritual Dance. Participants will dance traditional Balkan, Greek, Rom, Armenian, Near Eastern, and modern sacred circle dances in the spirit of honoring the divine, healing, and affirming connection to the earth and each other and building community. 3 – 5 p.m., $20 suggested donation.