“Tap is the most accessible form of dance for most newcomers to learn,” said choreographer and teacher Katie Bissinger, “because there’s something appealing about making rhythms with your feet — with the sheer noise of it. People feel less inhibited than with other forms of dance. When they hear the sound they’re making, there’s that satisfaction.” So it stands to reason that there are a lot of satisfied teenagers singing “I Got Rhythm” at the rehearsals of Haldane’s spring musical, Crazy for You, which opens a three-performance run there on Friday, March 15, for practically all of the large cast is donning tap shoes in this Gershwin-filled homage to the musicals of the 1930s. 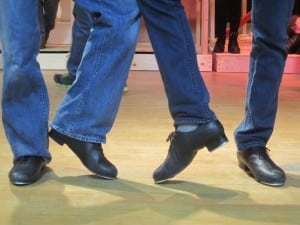 Two of the tap dancing cowboys in rehearsal. Photo by A. Rooney

Not a vintage musical, but instead a fairly recent one (it debuted on Broadway in 1992 and won the Tony Award that year for Best Musical), Crazy for You was based on the 1930 Gershwin musical Girl Crazy, but has many additional, classic Gershwin tunes, such as “Someone to Watch Over Me,” “They Can’t Take That Away From Me” and “Slap That Bass” thrown in for very good measure. The New York Times review of the Broadway production called it “a riotously entertaining show … [it] uncorked the American musical’s classic blend of music, laughter, dancing, sentiment and showmanship with a freshness and confidence rarely seen.”

After tackling two different takes on the 1950s with the previous seasons’ Guys and Dolls and Grease, director Martha Mechalakos and choreographer Bissinger this time were charged with transporting the actors and the audience to a very different era, one with a playful, light-as-a-feather plot involving Follies showgirls, a bankrupt theater, a young man engaged to the wrong woman, phony accents, a plucky heroine, lots of love-starved cowboys and a whole lot of singing and dancing, almost all of it tap.

Bissinger said that despite a daunting number of large, complicated dance numbers, she wasn’t intimidated entering the rehearsal process with a lot of novice dancers. She did have help going in, as sprinkled amongst the cast are quite a few of her current and previous dance students from Beacon’s Studio B, where she is dance director, and earlier at the Hudson Valley Dance Studio. “I felt confident, because I had enough ensemble members with at least some semblance of training, plus others whom I have taught for years,” she said.

Despite that, Bissinger knew she had to begin dance rehearsals early, and so casting took place towards the beginning of the school year rather than the usual months later, and all dancers had to report for duty beginning in October. For the first couple of months no actual rehearsing was done, just the learning of steps, including the colorfully named Shim Sham and Shave and a Haircut. 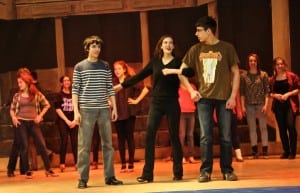 Matt Marino, left, Kady Neill and Cory Zouzias in rehearsal for Crazy for You. Photo by Maggie Benmour

In addition, several of the boys, including senior Matt Marino, the male lead, audited Bissinger’s tap classes in Beacon. “There was a group of 10-year-old girls tapping, and also some even younger,” said Marino. “Most of them knew me and thus mocked me. It’s probably been one of the most challenging productions I’ve been in technically — but I think we’ve wound up doing a pretty good job with it,” he said.

Freshman Eric Rizzi, a percussion player in the Haldane band, likened learning tap to “drumming with my feet — the rhythm and beat come naturally. The motion was hard to pick up at first, but with practice it has gotten better. It’s a good workout and fun to do. A lot of it is just mental — if you understand the rhythm it gets easier. You’re always thinking, planning your next step, because one false move and you will fall — you don’t realize the difficulty.”

Eighth-grader Andrew Platt, completely new to tapping, concurred. “In the beginning it was hard, but as you do it more and more, in a repetitive way, you catch on fast. It has become fun. I think the audience is really going to enjoy the show, because tap dancing is something we haven’t really done before.”

Mechalakos said, “Some of the boys have really embraced the dancing — and the audience will be sure to pick up on that.”

Actual rehearsals didn’t begin until early January. It went as Bissinger expected it to. “With teenagers it’s tricky to partner them up close, but the energy is so good and they’re game to do it — they all became really into it. It’s a lot of work, but it’s Gershwin, so it’s worth it, and I think they’re finally having fun!”

Bissinger knows from what she speaks — she’s a former Rockette (veteran of three Christmas shows), was dance captain for the National Tour of The Who’s Tommy, and has danced around the world, including the European tour of My One and Only and in Seoul, South Korea, in a company of 42nd Street.

Mechalakos was drawn most to the music in choosing this year’s production. “The Gershwin songs are some of the most wonderful ever written. The music is just one fabulous song after another,” she said. “The author, Ken Ludwig (who also wrote the adaptation of The Three Musketeers, which Hudson Valley Shakespeare will perform this summer), took Girl Crazy, wrote a new book with a new plot and very funny dialogue and then threw in all these other great Gershwin songs and even parts of some Gershwin orchestral pieces, like Rhapsody in Blue. Add in the happy enthusiasm all these kids have for this genre, tons of costumes — there are 10 girls with six costume changes each — and hey, there’s nothing like tapping cowboys! There’s a lot of physical comedy and it’s all very funny, very clever.”

The boys tap away during a recent rehearsal. Photo by Maggie Benmour

There’s been a behind-the-scenes dramatic component to this production as well. The female lead, senior Kady Neill, is planning on a career in theater; she participated in the Carnegie-Mellon University School of Drama summer pre-college training program last summer, takes private voice lessons and has spent the fall and winter applying to many of the country’s top theater and musical theater colleges and conservatories. Unexpectedly, a mere three weeks before the show opening, she was told she had made the final callbacks for one of the most illustrious of these schools. And those final callbacks were to take place on the second and third performance days, all day long, thereby making it impossible for her to perform in Crazy for You outside of the first show.

So, with just three weeks’ preparation, the girl playing the “second lead,” Lucy Austin, a freshman who also studies voice and dance privately (and this reporter’s daughter), was asked to step into the role for the second and third shows. And, in a domino effect, that second lead role then needed filling for those shows, and another freshman, Allisen Casey, who is in her very first Haldane musical, was called up for that featured part. Add in another important cast member with a sudden appendicitis attack last week, and it’s almost sounding like the plot of one of those ’30s musicals where, happily, everything winds up just peachy at the end. 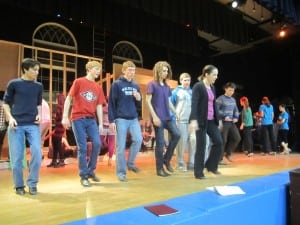 Choreographer Katie Bissinger works with the tapping cowboys on the final bows. Photo by A. Rooney

No drama was in evidence at a recent rehearsal; midway through the process, there were tapping kids everywhere. One of them, ninth-grader Leandra Rice, said: “Katie [Bissinger] did a wonderful job teaching us. We learned about 15 different steps. I thought it was going to be hard, and it is harder than I first expected, but it’s really fun too. I like the connections you build with others in the cast; the experience is just completely fun. And the audience is just going to love all of it.”

Crazy for You will be performed at the Haldane auditorium three times, Friday and Saturday, March 15 and 16, at 7 p.m., and Sunday, March 17, at 2 p.m. Tickets cost $15 for adults, $5 for students and seniors, and can be reserved in advance by calling 845-265-9254, ext. 111. Tickets will also be available at the door; in past years, however, some of the shows have sold out in advance, so it is best to reserve if possible. It is more than suitable for children of all ages — even the youngest are sure to enjoy it.