Towards the middle of the first of a two-day workshop on teaching Shakespeare, Chris Edwards, who was instructing a group of high school and middle school educators, gave them scenes to enact. “Don’t distill the language to less,” he said. “Instead use more of your words to say what he says. Read it and communicate it.” 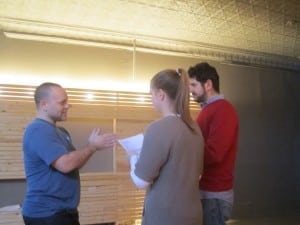 Chris Edwards, left, works with Rachel Ashendorf and Laurence Berkowitz on a scene from ‘Othello.’

What Edwards was trying to get the teachers to do was to tear down the wall between the formality of the words and the universality of the actions and the story they told. The ultimate goal was, of course, for the teachers to soak up the teaching methodology and use it themselves in the classroom, working to make Shakespeare not only accessible, but alive and breathing to a generation short-circuited by the quick phrases of texting and other contemporary communication.

This year Edwards, director of education at Hudson Valley Shakespeare Festival (HVSF), has expanded the Teachers’ Shakespeare Institute Workshops, offering two separate two-day programs, one this past winter and another to be offered in July, both at Cold Spring’s The Living Room. The workshops cover similar but not identical ground and are designed to be of value as stand-alones or as a pair.

The winter edition attracted teachers from several Westchester school districts as well as one from Poughkeepsie. They happened to be divided equally between male and female, and all were young — perhaps most eager to embrace new teaching techniques. Many had been stimulated to attend by experiencing the HVSF’s Access Shakespeare touring program at their own schools. These popular programs bring a touring production directly to schools, performed by professional teaching actors.

The 90-minute productions are always followed by talkback sessions between the actors and the students, discussing the text, themes, characters and the artistic process. The teachers’ workshops and the touring program use the same play — this season’s is Othello — so the teachers can apply text-specific techniques.

Written material provided to participants noted three overall goals of the programs: Students will be able to approach the language, characters, and stories of dramatic literature with confidence and without fear; students will understand that Shakespeare’s work is interesting/cool/fascinating and relevant to their lives/speaks to them/is accessible; students will be able to comprehend a classical (difficult) text in order to make creative choices based on their understanding of it. 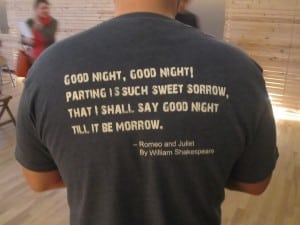 Chris Edwards, dressed for the occasion

The first morning’s workshop focused on playing with the physicality of the Othello text, finding gestural, behavioral and expressive ways of enacting the meaning behind the words. The day had begun with an icebreaker, where participants were asked about the challenges they face as teachers and their goals in taking the program.

After lunch Edwards broke the participants into groups of twos and threes, assigning them each different scenes and characters from Othello, and giving each group what he called a combination of tools and rules in formulating how to rehearse and play the scene. “You may cut the text,” he instructed, “but you have to justify it in some manner, whether it is plot, poetry or action. Your setting is important. You must have one but you don’t have to say what it is. There must be an identifiable beginning, middle and end. It must include the entrance, any exits and incorporate something unexpected.”

Edwards further told the teachers, “I will treat you like you are my students. Get up on your feet and incorporate some of the work of today. Mark your thoughts out. I will float around and annoy you!” Edwards said the goal was to put the teachers in the same situation as their students and to get them thinking more about thoughts, phrasing, how to keep a thought moving.

Expanding more, he asked, “How is someone going to understand 14 lines if they can’t go in and grasp the core of it first? Find the inherent story in those lines.” To accomplish this, Edwards got the teachers to work on these scenes and then had each group perform. He then, on an impromptu basis, added twists, reversals, permutations. Writing a phrase, “I didn’t say I ate the chocolate,” down on a piece of paper to further explicate this, he spoke of the seven different ways to say it (one way for each word) and how each different emphasis changed the meaning of the phrase. 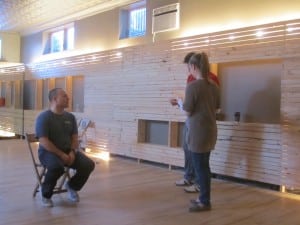 As Edwards walked around the large space, visiting each group as they rehearsed independently, he threw them both curveballs and guidance, telling one group to “build character in action — think about all of the different ways to close the door when you are leaving, each reflecting a different mood or character.” Sure enough, as that group experimented, that action altered the flavor of the scene, though the text stayed the same throughout. Another group changed it up by having one person change his character’s words into contemporary language while the other used the original text.

When the third group performed their scene, Edwards asked them to consider what time it was, and then told them to “change the space between the two of you,” advising one to be “careful of wandering when you say your lines. Always move with a purpose. Don’t show you don’t want to do it, tell it.” Edwards then had them play the scene in an opposite fashion, “Everything you did, intention-wise, play the opposite. It will change the intention of the language.  It’s hard, but try it.”

And try it they did, with quite different results, prompting one of the teachers to think out loud, saying, “This way got me to question the character of Cassio. In the first version Cassio was more rational; this time he is pummeled by love.” Edwards agreed, saying, “Both ways may be true. Now, put both those ways of playing together, because these characters are complex.”

Speaking of his own work, Edwards continued, “I’m in a place as a director that the beauty of your life to draw on is more important than how you see the character — and your use of language changed in the last one.” Turning to the group as a whole, Edwards said, “These are simple things to play with. I didn’t give them direction. In my ‘opposites,’ etc., they found what works for them. As a teacher sometimes in a class with 20 kids, it’s overwhelming and you feel you have to come up with 100 ideas. Instead, let them own it.”

The second day of the workshop was scheduled to contain more scene play, followed by movement ensemble work and some writing. Edwards closed out the session by telling the teachers, “All the things we did today, you should be able to walk into your classroom tomorrow.”

Earlier, Edwards had asked one teacher to stand up and simply relate what she had done upon waking up that morning. After she told of her mundane tooth-brushing, coffee drinking, etc., Edwards told her to repeat it, this time giving specific emphasis to the most key words, “accentuating them up,” telling her that the little lift wasn’t there in her reading. She recited the same factual sentences again, this time with pointed emphasis, but again Edwards called her out, telling her that what she had done by overly emphasizing certain words and phrases was to turn everything into a question. 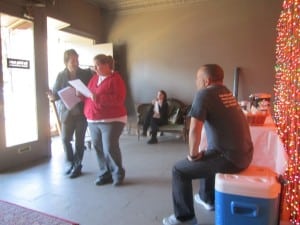 Chris Edwards, right, watches a group of teachers working on a scene from ‘Othello.’

He asked her to “start again, going up on the key words, but without a question mark at the end of each sentence. Awareness of this stuff is 98 percent of making it interesting for the listener. We actually talk in iambic pentameter a lot more than we think.”

The teachers appeared to be avid participants, and even by the middle of the first day, those asked found the workshop very worthwhile. Rachel Ashendorf, a middle school teacher from the Yonkers Montessori Academy, said the workshop “gives you the skills to make Shakespeare accessible, through activities and ideas, regardless of students’ reading level. Everyone can explore, and this is not stiff and rigid; they get ownership of it. Anything which can get them out of their docile boxes is good, and this also builds a sense of community; once they get over that initial awkward hump, it’s great.”

Laurence Berkowitz, a high school teacher from the same school, said he now thinks he can “support my students better for the in-school workshop by preparing in advance of the activities. What I’m doing in class is having the language come to life. I’m excited to be a part of it. These activities give the students a touchstone.”

The educational tour of Othello has just begun. A 90-minute, fully staged version is performed and, at the conclusion, the actors and the students participate in a group talkback, discussing the “artistic process, themes and characters, with students encouraged to voice their personal points of view and to ask questions,” as stated in the description. This touring production, suitable for those in sixth grade and up, will be performed at the Depot Theatre in Garrison on Sat. April 20, at 2 p.m.  For tickets, visit brownpapertickets.com.

Details on the next Teachers’ Shakespeare Institute can be found at hvshakespeare.org, by calling 845-809-5750 or by emailing Education Programs Manager Nora Rosoff at [email protected]