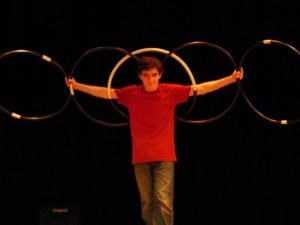 Once again, the talented teens of Haldane High School will take to the stage for the enjoyment of all, in the annual talent show, which this year takes place on Friday, April 26, at 7 p.m. From bouzouki and sitar-playing to a pirate duel, from a Native American traditional hoop dance to a Bob Fosse number, and even a yo-yo demonstration alongside the more usual music and vocals, the talent show gets those kids up from their desks and should provide the audience with surprise after surprise.

In addition, there will be the highly anticipated dance by a local crew, better known as members of the Haldane teaching staff, trying to outdo their showstoppers of previous years. To further whet the appetite, there is the enticement of “other special guests never before seen on stage or screen.”

Tickets will be available at the door and cost $5 for children, students and senior citizens; $10 for adults. All proceeds support the Haldane Music Department. The whole community is invited — not just parents — and the evening is suitable for all ages.