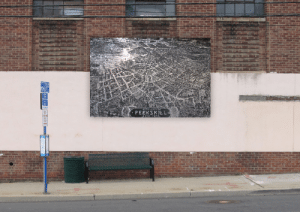 Mural at 1698 Main St. in Peekskill
(Image courtesy of the artist, Nestor Madalengoitia)

Sunday, June 9, The Hudson Valley Center for Contemporary Art (HVCCA) will host Curtain Call at Riverfront Factory, 417 Main St. in Peekskill. The event is open to the public from 2 to 6 p.m., with an artists’ reception from 4 to 6 p.m.

The exhibition will focus on performance and interactive art, featuring works by Z Behl, Andrea Bianconi, Pepe Coronado, Chad Stayrook and others. Marcy B. Freedman will use Washington Irving’s famous short story Rip Van Winkle as the starting point for a performance titled Once Upon a Time Is Now, where she invites members of the public to have one-on-one discussions with her.

At 3 p.m. there will be a tour of Bohlman Park, located at the corner of Main and Hadden Streets, featuring two new outdoor works: a sculpture by Kai Vierstra and a mural designed by Nestor Madalengoitia. Other artists with works on display include Charles Harlan, Oliver Jones, Brent Owens and Marko Remec. Madalengoitia’s mural depicting the City of Peekskill from an aerial view will be installed on the exterior of the Pasta Factory at 1698 Main St.