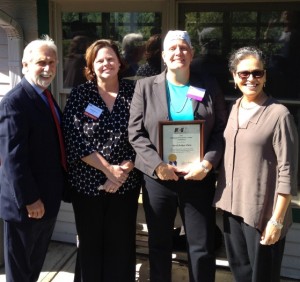 Otten, PARC’s Director of Development and Outreach, received the award Sept. 17, at the 2013 PCSN Awards Breakfast. The annual event recognizes outstanding individuals and groups that make significant contributions to the Putnam County community.

Otten, who received the Katie O’Donnell Award of Excellence for Leadership from the Cold Spring Area Chamber of Commerce earlier this year, celebrates her 11th year with PARC this October.

Otten was nominated by Putnam County Tourism Director and former New York State First Lady Libby Pataki for this year’s award. Pataki nominated Otten for her passion for fundraising and increasing the profile of both PARC and Partners with PARC. “She understands people, places, and businesses and is a wiz at marketing and advertising,” wrote Pataki. “Rand is a remarkable, energetic woman who is dedicated to her profession and to her community.”

A longtime Putnam County resident, Otten is an award-winning fundraiser and former journalist. She joined PARC in October 2002 and has been successful in fundraising efforts, increasing the agency’s membership, and creating regional tourism-driven events.

PCSN was started as a result of Putnam Alliance’s 1985 Dynamic Decade Project and is now an educational outreach program of Cornell Cooperative Extension, with the mission of fostering networking and better communication among human service agencies in Putnam.