Cold Spring has been named “Best Weekend Retreat” by The Village Voice, New York City’s iconic alternative newsweekly. The announcement came via correspondence from Debbi Milner, president of the Cold Spring Area Chamber of Commerce, at the Oct. 29 (Tuesday) meeting of the Village Board. A presentation and reception is planned at 4 p.m. on Friday, Nov. 1, at The Hudson House. “The Chamber is thrilled to be recognized by the overwhelming majority of readers and editors at The Village Voice,” Milner told The Paper. “With our historic Main Street leading out to the waterfront; our unique shops, restaurants, trails and bountiful cultural sites, we are blessed with the best everyday retreat.” Founded in 1955, The Village Voice has received three Pulitzer prizes along with several other major journalism awards. 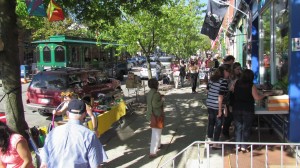 It’s almost that time of year again. Trustees passed a resolution invoking the annual winter parking rules effective Nov. 15 through April 15, 2014. The rules, “…prohibit all overnight parking between the hours of 12:01 a.m. and 6 a.m.,” however the ban is enforced only when heavy snowfall is predicted or has taken place. The parking ban facilitates plowing of village streets. Residents can call the village highway department at 265-4883 after 5 p.m. for a recorded message indicating if the street parking is banned on any given night. The legal notice also reminds residents that the ban is sometimes enforced for days after a snow storm. The notice also advises that when in doubt, residents should remove their vehicles from the street at night.  Cars can be towed at the owner’s expense and parking tickets can also be issued. When parking is banned, off-street parking is available on Kemble Avene south of The Boulevard and in the municipal lot next to the Riverview Restaurant on Fair Street. Trustees suspended the winter parking rules for the dead-end portion of Marion Avenue south of Benedict Road, making it legal to park there in the event of snow.

The notice also reminds owners or residents of all buildings or lots in the village that they are responsible for keeping “the full width of the sidewalk free of snow and ice.” If removal is not possible, the law requires that sand, calcium chloride or other non-damaging materials be used to keep sidewalks passable for pedestrians.

Village Attorney Mike Liguori will be asked to advise the village on two water-related issues. Recently a leak in a water line in Nelsonville was repaired by Village of Cold Spring workers. Cold Spring owns the waterlines and provides water to Nelsonville. Liguori will develop a policy regarding such repairs in the future. “I think we (Cold Spring) should do the repairs … but it’s a can of worms if they (Nelsonville) take no responsibility,” Mayor Ralph Falloon said, adding that in his view, Nelsonville should be charged for time and materials.

Superintendent of Water and Sewers Greg Phillips presented a report regarding the village’s ability to meet regulations administered by the Underground Facilities Protective Organization (UFPO), also known as Dig Safely New York. Anyone proposing to dig in an area that may include water, sewer, electric or cable lines – including residents, contractors and utility companies – must inform UFPO via its online, automated registry. Owners of the various utilities, including the Village of Cold Spring, then advise the proponent if the proposed dig will affect any underground lines. Phillips said that the online form does not cover all possible scenarios – a situation that could leave the village liable, or at the very least delay projects. Phillips also pointed out difficulties in pinpointing the exact location of sewer lines. While waterlines are easily traced because they are made of metal, sewer lines are not and are difficult to delineate.  Also in question is the village’s liability if it provides information regarding the location of lines on private property. The village owns sewer and waterlines from the main line to the curb. Individual property owners own the portion of those lines between the curb and the home or business involved. Liguori will advise the Village Board on the issues Phillips raised.

The Village of Cold Spring is being asked to support a Town of Philipstown application for funding to develop a Multi-jurisdictional All Hazard Mitigation Plan. Grant funding is available from New York State covering 75 percent of the cost of the project. The Village of Nelsonville has also been asked to participate. Falloon said that while he wants to support Philipstown’s request, “It’s a bit of a Catch 22” since Putnam County is completing a similar plan. The benefit in supporting Philipstown, the mayor said, is that its mitigation plan will be more detailed and will have a more local focus than the county initiative. Philipstown has unsuccessfully applied for the same funding in the past. No vote was taken because Trustees Stephanie Hawkins and Charles Hustis were absent due to other commitments.

Asked for an update on the possibility of Christmas lights being installed along Main Street this year, Falloon said that the Cold Spring Area Chamber of Commerce has taken on the project. Chamber President Debbi Milner confirmed that in an email to The Paper. “The Chamber is handling street lighting for the holiday – and hopefully for the long-term street lighting,” she said. Central Hudson will no longer permit lights to be strung from pole to pole across Main Street – without major investment by the village. “We are looking for $600 for holiday lights,” Milner said. “(We) should be able to raise that quickly and already have three offers for assistance in funding.” She said the local chamber also hopes to work with the Putnam County Chamber of Commerce on grant and/or private funding to upgrade village street lighting, “so that we can have a well-lit street that invites our businesses to stay open longer and more residents and visitors to come for evenings.”