My doctor once told me that I should try drinking a cup of tea sweetened by a single teaspoon of sugar in the afternoons, if indeed I had an insatiable daily craving for sweets, as I’d claimed. One teaspoon of sugar, she explained, has only 16 calories.

What prompted her comment was the number that the scale had come to rest at when I’d stepped on it – a number that seemed to indicate that my current afternoon remedies were, perhaps, a bit heavy-handed.

She had a point. The three babies that had recently passed through my body had shifted it towards a certain maternal … generosity. But although I tried following her good advice in the months that followed, I did not return to a more comfortable weight for more than a year. I simply wasn’t ready. 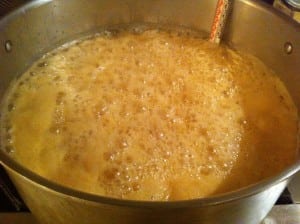 I think of that doctor sometimes, and her tidbit of wise counsel cloaked in Manhattan condescension. Because there are days when a cup of tea with a spoonful of sugar is perfect.

But there are other days when the idea that tea – tea! – could satisfy me is ridiculous because what I really need is candy.

Candy’s genius lies in the fact that it so precisely delivers its sugar load. Unlike, say, cookies or cake, which offer sweetness padded with flour and butter, candy doesn’t introduce a lot of unnecessary baggage into the experience.

Which isn’t to say that candy can get away with being merely sweet. The best candies balance sweet notes with bitter, sour, or salty ones (chocolate is the most famous example of bitterness tamed by sweetness). They also offer subtler essences, like those from woodsy nuts and fragrant vanilla, or the intricate, toasted flavors that occur when ingredients are caramelized.

When I was a kid, ordinary candy still had a little complexity to it – the kind you now only find in gourmet confections. These days, candy bars are so bland they’re hardly worth stealing from your kids’ Halloween bags. Of course, I still do, driven by some perverse, cantankerous need to confirm my disappointment. 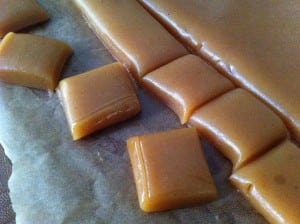 Walking along Parrott Street last week while my kids stockpiled their (our) annual supply, I overheard a man say, “The best candies are Bit-O-Honeys,” and I rushed toward him, crying, “Oh my god! They are! They’re my all-time favorites!” I was dressed as a ghoul, he as a dad, and we stared at each other a moment, realized we had nothing more to say, and went our separate ways.

But it turns out I am not quite done talking about Bit-O-Honeys, because I want to share with you this little-known fact: They are the perfect candy. Over the years they have gotten lumped in with Mary Janes (blah) and Squirrel Nut Zippers (yawn), but they are far, far superior to either, with exactly that kind of play-on-your-tongue mix of flavors that has gone missing from mass-market confections.

I have taken to buying a couple pounds of them whenever my family passes through Weston, Vt., where the Vermont Country Store sells penny candy by the barrel. This summer, after I acquired my stash, the kids decided that I should devote a whole column to the Bit-O-Honey. The recipe, they agreed, would go like this – ingredients: 1 Bit O-Honey; instructions: Open it. Discard wrapper. Eat.

What they didn’t realize is that I planned to follow their instructions to the letter this fall, whenever I was craving something small and sweet. But I couldn’t. Because one day, barely three weeks later, I searched the high shelf where I’d hidden them and discovered they’d all been eaten. Every last one of them.

Last night I made apple cider caramels for the school forest fundraiser. They came out great, with a little spice and tartness from the cider, and enough burnt caramel notes to offset the sweetness. I made a double batch, so I could put aside some for myself and some for my kids, who clearly have not yet learned that sometimes a cup of tea sweetened by a teaspoon of sugar is all you really need to get through the afternoon.

Caramel is easy to make, but has a reputation for being dangerous because not only is the sugar mixture hotter than boiling water, it will stick to your skin if it spills on it. Take care when making it.