I met Sue Travis at her home to watch her clean out her worm bin. Travis is a master gardener and volunteers with the Cornell Cooperative Extension program in Putnam County. Among other things, she’s committed to being a responsible steward for the planet and that drives her to teach others about the things she’s learned. Her worm bin is a 10-gallon plastic container, easy to find at many stores, and it’s currently home to about 200 Red Wrigglers. 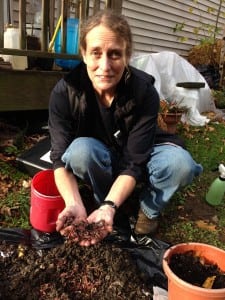 Sue Travis shows off a handful of Red Wriggler worms she uses for vermicomposting. (Photo by P. Doan)

Travis invited me over for the cleanup because it’s a good way to demonstrate how to set up the bin, harvest the compost, and feed the worms. She keeps the container inside her house, set up on a couple of bricks to let air circulate underneath. It isn’t dirty or smelly and it makes for easy access to feed the potted plants she keeps on a windowsill. She scooped up a handful to show me her “black gold” and dropped it into a ficus. Compost can be placed right on top of existing soil, it doesn’t need to be worked in and in fact, it’s better if the soil isn’t disturbed.

To clean the bin and harvest the compost, Travis took the container outside. Although it felt chilly to me at 44 degrees, she said, “The worms love this weather.” She laid a piece of landscape fabric out on the ground and started scooping out handfuls of compost mixed with worms and newspaper. She made piles on the fabric and said, “They’ll move to the bottom of the pile, they don’t like light, and then as they separate from the compost, I pull it out.” Just like she said, the worms, skinny little guys of various sizes from one to two inches long, burrowed out of sight.

Once the container was empty, Travis shredded newspaper. “They prefer The New York Times,” she said, and collected a stack of letters that were torn apart. “I’ll never have a problem with identity theft,” adding that to the bottom of the bin. The worms will eat the paper, along with a diet of food scraps, plant waste and shredded leaves, pretty much everything that can go into regular compost bins, but without the concern about balancing the ratio of browns and greens, the carbon and nitrogen. Never use meat, oils, dairy products or pet waste in any compost, though, stick to the apple cores and banana peels. Newspaper ink is made of soy and doesn’t pose a problem.

Travis misted the ingredients with water as she created layers. “Moisture helps, they need it, just make it damp, though, not too wet. If it gets too wet, add more paper to absorb it.” She added clumps of compost with the worms back into the bin as she went along. This 10-gallon container started out with 50 worms that she bought online. Now Travis estimates there about 200, yes, in a healthy worm bin, they’ll breed. She carefully separated tiny yellow eggs from the compost and put them back in the bin.

Red Wrigglers are a great choice for vermicomposting. They don’t burrow deeply and like to live closely together. Anyone who likes to fish is familiar with them; they’re a bait of choice. Don’t set up a vermicomposting bin with worms from the garden, though. They won’t like the conditions that are ideal for creating compost and definitely won’t breed. Eventually, they’ll all die off and your bin will be empty.

Travis empties her 10-gallon container completely and harvests the compost about twice a year, that means she gets about 20 gallons of compost a year. Other systems for vermicomposting are vertical or horizontal bins that have trays. Start at the bottom or the outside and when the tray is full of compost, start adding food to the next tray. The worms will move to the food and leave the compost behind for harvest. Wood, wire, and plastic are all non-porous materials to construct a worm bin. Avoid metal, though, it’s harder to keep the temperature stable. Worm bins can be kept outside most of the year, but shouldn’t be left out when it’s below freezing.

Compost made by worms has more nutrients than compost made by heat. The microbes in the worm casings make a rich and fertile addition to soil. As Travis noted: “I never have to buy compost or fertilizer and it really cuts down on garbage. I don’t need to send all this to a landfill.” She recommended a book that she still refers to, Worms Eat My Garbage by Mary Appelhof, who also maintains an online guide at wormwoman.com.