Continuing to deal with the aftermath of Sunday’s horrendous train derailment, Metro-North Railroad on Monday urged Hudson Line customers to work from home or car pool if they must travel into New York City.

According to an updated notice posted on the Metro-North website Dec. 2, “limited Hudson Line service will remain in effect on Tuesday, Dec. 3, due to Sunday’s train derailment. Customers should expect crowded conditions.” Moreover, Metro-North cautioned, “people who do not have to travel are urged to telecommute or carpool if possible.” 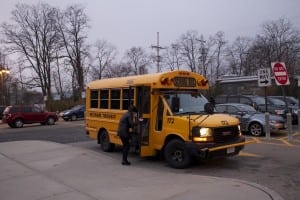 A commuter boards a shuttle bus at the Cold Spring station (photo by K.E. Foley)

Metro-North announced that the Harlem Line would provide extra parking at the Southeast train station, “along Independent Way, which is in walking distance” of the station; and at Kensico Dam, on 600 Park Drive West, Valhalla, offering 500 parking spaces within walking distance of that station.

Regarding the Hudson Line itself, the notice said, “for southbound service, limited train service will operate between the Poughkeepsie and Yonkers stations, only, and connect with shuttle bus service to Van Cortlandt Park-242 St., for No. 1 Subway service into Manhattan.

For northbound service between the Yonkers and Poughkeepsie stations only, customers should take the S Shuttle from Grand Central to Times Square for No. 1 Subway Service to Van Cortlandt Park-242 St. Bus service will operate to Yonkers Station and connect with limited train service to Poughkeepsie.”

Metro-North said special schedules to and from Yonkers and Poughkeepsie are posted on its website schedules page. Metro-North can be found online at new.mta.info/mnr.

On the county government website, Putnam County likewise posted information about its special shuttle service, linking the Cold Spring and Garrison train stations to the Harlem Line via the Southeast train station. “This service will continue as long as the Hudson River commuter service is interrupted,” the county promised.

In the morning, the shuttle runs from Cold Spring six times, between 5 and 7:15; and three times from the Garrison station, between 5 and 8. For the later return trip, to both Cold Spring and Garrison, it picks up passengers in Southeast at 6, 6:30, and 7:15 p.m.

For specific details, residents can check the Putnam County website.