Generosity, satisfaction and style went around and came around at the second semi-annual Philipstown Women’s Clothing Exchange held on Sunday afternoon, Jan. 5, at the Philipstown.info/The Paper offices in Cold Spring. 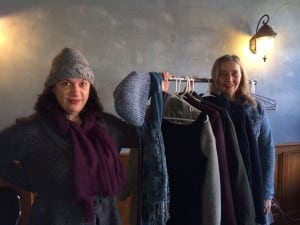 Michele Gedney, left, and Kate Vikstrom, organizers of the clothing exchange, wearing some of their new items. (Photo by Mary Ann Ebner)

Approximately 30 people brought in well-loved, gently-used, but no-longer-wearable clothes and left with some fabulous new finds, having enjoyed a bit of camaraderie and confection in between. Not a penny changed hands; the only investments required were some time, care, and opinions shared as to what looked good or maybe not. Several participants expressed their joy at seeing their former dress or skirt going home with someone else who found it “just right.”

After two hours of successful treasure-seeking, the last shoppers packed the untaken goods into bags and dropped them off at The Walter Hoving Home in Garrison, where residents received them happily.

The Philipstown Women’s Clothing Exchange, a concept imported to Philipstown from Alaska by Kate Vikstrom, layout editor of Philipstown.info/The Paper, has been embraced by her colleague Michele Gedney, Advertising Director, and supported by other members of the staff and the community. The second event more than doubled the number of contributions and customers from the May inaugural, motivating the team to plan a third Philipstown Women’s Clothing Exchange in early summer.