Cole Porter never feels dated. His eyebrow-raising, grin-inducing lyrics can still feel outré, silly and sophisticated at the same time. And while many of his references are relics of an earlier era requiring a little scavenger-hunting to unearth, others are timeless and eternally droll.

In just one song, You’re The Top, a string of unrelated people, places and things — among them Tower of Pisa, Toscanini, Arrow Collar, the nose of the great Durante, pants on a Roxy usher, Camembert — are bandied about to convey that quality of being ‘the ultimate’ of any given thing, something Porter himself was, as a lyricist and composer.

Haldane’s high school musical theater kids, having celebrated the Gershwins last year to great acclaim with Crazy For You, return to that same era next weekend, March 14 to 16, with Anything Goes.

Leandra Rice jumps for joy at a recent Anything Goes rehearsal, as sailors and chorus girls look on.  (Photo by Jim Mechalakos)

Many will be putting tap dancing skills learned last year to use, time stepping away on board one of those sleek, glamorous ocean liners bound from New York to London, with everything from riffraff to debutantes, tycoons to gangsters’ molls aboard.

The prop list alone gives an indication of what’s in store for audiences: violin case with Tommy gun, martini glasses and ‘stuffed toy bulldog wearing a Yale sweater’ are a tiny sampling of the knowing zaniness on tap.

Anything Goes is one of those musicals where even a brief description of the plot becomes as complicated as proving Fermat’s last theorem, but it vaguely involves a stowaway involved in a love triangle with a debutante (there was some frisky business in a taxi), guarded over by her imperious mother, and a titled British aristocrat who just happens to be researching American slang. Assisting the stowaway, (who is actually the assistant to a tycoon) is one Reno Sweeney, an “evangelist-turned-nightclub singer” who is apt to break out into big belty numbers about once every 10 minutes, and her ‘angelic’ (but maybe quite not so upon closer inspection …) squad of showgirls. 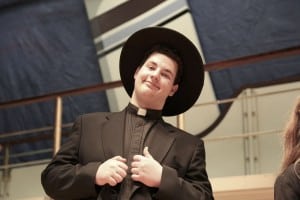 Tyler Mell as Moonface Martin, who isn’t always who he appears to be.  (Photo by Jim Mechalakos)

Oh and then there’s the hapless Moonface Martin, aka ‘Public Enemy No. 13’ disguised (first) as a missionary. Add in lots of sailors who all seem to have been given tap dancing classes along with navigation training, the ship’s captain and purser trying (and failing miserably) to maintain shipboard order, bartenders, ministers, FBI men, photographers, the mysterious ‘old lady in a wheelchair’ and — but of course — a small lapdog, prone to running away. In classic 30s screwball fashion, mistaken identities, outrage, many duets, and almost as many marriage proposals ensue, all accompanied by some of Cole Porter’s most familiar (I Get A Kick Out of You, It’s De-lovely, Easy To Love, the title song) and more obscure (The Gypsy In Me, There’s No Cure Like Travel) tunes.

With about 40 parts, none would dispute that certainly one of the showiest will be Cheeky, the Pekingese, to be played, after a Philipstown-wide search, by Bella, a one-and-a half-year-old Shih Tzu, who lives with her family, the Cofinis, in Cold Spring. Bella’s program bio states: “She is a happy dog and instantly makes everyone she comes in contact with very happy … This is Bella’s first stage performance and she and her family are very excited!”

Bella’s main “handler” on stage will be Haldane senior Alison Duncan, who has thus far handled roles in every single Haldane fall and spring drama and musical production since sixth grade. She started after tagging along with a friend to an audition, thinking she’d get a non-speaking role. Instead, she landed a speaking part, and, as things continued, came to realize, “Hey, maybe I can do this.” Duncan plays Evangeline Harcourt, whom she describes as “sassy, ditzy and controlling — really fun — a combo you just can’t beat.” 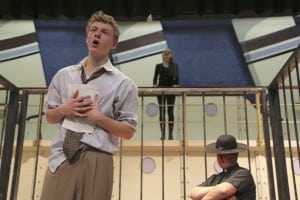 She also serves as a dance captain, which means she must learn every bit of choreography for everyone in the show and rehearse and go over the material with small groups on behalf of choreographer Katie Bissinger, so that everyone is kept up to speed. Duncan loves being a dance captain, saying “it’s so awesome, because people look up to you as someone who knows what’s going on, plus I get to work one-on-one with kids who are struggling, so it’s really fulfilling.” She calls Bissinger “Fantastic — an inspiration. She works so hard and puts so much of her time into these shows along with running her own dance studio — it’s amazing.” In addition to all of this activity, Duncan is understudying the lead role of Reno Sweeney.

Director Martha Mechalakos says the cast has been enjoying the rehearsal process. “This show is fun — a romp. I chose it because it gave a whole lot of kids some opportunities; there are quite a few good parts, a good balance of roles with some ensemble parts beyond just a dance ensemble because there are some strong singers who aren’t necessarily great dancers.” 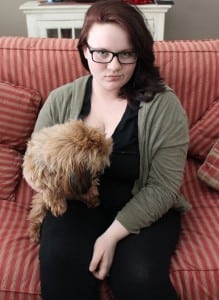 Alison Duncan as the ”ditzy, sassy, controlling” Mrs. Harcourt with castmate  Bella, aka Cheeky. (Photo by A. Rooney)

Mechalakos promises a “fantastic set — the biggest ever on stage at Haldane, designed by Mary Rice and built by an incredible group of volunteers: Paul Henderson, Joe Platt, Bobby Convertino and Craig Roffman, who have spent many whole weekends working on it. We’ve also had a huge level of support from Damian McDonald on the sound and lighting and Boo Close and Charlotte Palmer Lane with costumes as well as [teacher] Andrea McCue, our assistant director, who always goes above and beyond.”

In choosing a musical each year, Mechalakos, who holds a B.M. and M.M. in vocal performance and literature from Rochester’s Eastman School of Music where she had an opera fellowship, says the score is the first thing that compels her interest.

“The music has to have integrity for me to put out the effort,” she notes. “With Cole Porter, I find there’s a similar style to what comes out of jazz, harmonically — there are some wild chords going on.” This production is using the arrangements done for the 1987 Lincoln Center revival production, which are more oriented toward a swing band, and not reliant on a heavy string section. An 11- or 12-piece band, including many professional musicians, will accompany the students.

After months of rehearsals and the daunting challenge of mounting this show amidst many snow day cancellations, the cast is ready to head up the gangplank and take their places at the stern, bow and points in between, all the while singing irresistible lyrics like these, pulled at random from Friendship:

If you ever feel so happy you land in jail, I’m your bail

If you ever lose your teeth when you’re out to dine, borrow mine

If they ever cook your goose, turn me loose

If you ever lose your mind, I’ll be kind

If you’re ever in a mill and get sawed in half, I won’t laugh

when other friendships have ceased to jell, ours will still be swell.

Anything Goes, which is suitable for all ages, will be performed at the Haldane auditorium on Friday and Saturday, March 14 and 15, at 7 p.m., and at 2 p.m. on Sunday, March 16. Tickets cost $15 for adults, $8 for students and seniors. For reservations and information call the school at 845-265-9254, ext. 111. Tickets will also be available at the door if the performance is not sold out.