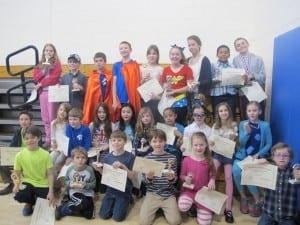 Winners were selected from two age groups to represent the school at the Tri-County Science and Technology Fair on April 26 at White Plains High School.

Garrison School Principal Stephanie Impellittiere congratulated all participants and challenged students present at the ceremony to consider that in the course of their lifetime, one or more of them could be the next brilliant scientist of the future.

“Starting with MAD Science Week in January and our popular Middle School Science Myth Busters series, students are guided through the basics of the scientific method, participate in several experiments and finally are encouraged to develop their own scientific theories,” Impellittiere said. “The Science Fair is the culmination of months of hard work and preparation by our students, with support from our teachers and community volunteers. We wish all of our winners luck as they represent the Garrison School at the Tri-County Science and Technology Fair later this month and we truly appreciate all of the time and commitment given to make this event a huge success.”