Putnam County Republicans last week formally endorsed the bid by County Executive MaryEllen Odell for re-election, nominating her at a Putnam convention. The action, by the county Republican Committee, occurred April 8 at the Putnam County Golf Course, one of Odell’s favorite venues for events. 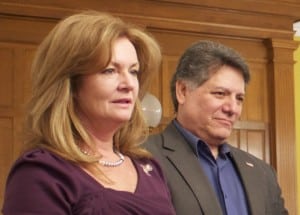 Odell’s current term — her first as county executive — concludes at the end of this year. She took office on Veteran’s Day in 2011 under unusual circumstances, after winning a special election that followed the temporary tenure as county executive of Paul Eldridge. The county’s personnel director, Eldridge took over after the arrest and subsequent imprisonment of Vincent Leibell, a state senator who had won the race for county executive in November 2010 but never held the office.

According to Putnam Republicans, the committee vote in favor of Odell was unanimous. “It’s clear as a result of the overwhelming support MaryEllen Odell received at the convention that she is the best person to hold the position of Putnam County executive,” Putnam County Republican Chairman Jim DeBella said after the vote.

Odell thanked her fellow Republicans for their confidence in her and “for recognizing the opportunity we have to continue moving Putnam County forward,” she said. “Look at what my administration has been able to accomplish in only two and a half years. Can you imagine what we can actually get done in another four?”

Democrat Sam Oliverio, a member of the Putnam County Legislature, also is running for county executive.