‘People who live in these homes love these homes and understand the intellectual drive behind them.’

Extensive use of glass positioned to accentuate geometric shapes is a staple of modern architecture. In the many homes built since the mid-1940s in this always dramatic part of the Hudson Valley, there is almost always a third element: siting.

The reason for all that glass is to set off the splendors of what’s just outside, and, in many cases to extend an invitation to the exterior realm to not be a stranger within.

The Putnam History Museum (PHM), in a departure from frequent visits to a more distant past, takes a closer look at these homes, their architects, features and settings, in a new exhibition, Modern Residential Architecture in the Hudson Highlands. The exhibit opens on May 3, with a reception from 5 to 7 p.m., and continues through mid-December. 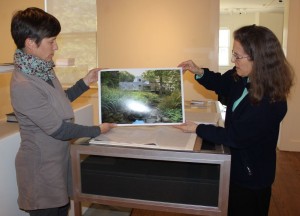 Modern Residential Architecture co-curators Lisa Weilbacker, left, and Trudie Grace examine a photograph being considered for the exhibition, prior to its opening. (Photo by A. Rooney)

Co-curated by Trudie Grace and Lisa Weilbacker, the idea for the exhibit germinated when Weilbacker, then living in Garrison and working for the museum (she has since moved further north and is director of Historic Hudson), became aware of the “incredible display of wonderful examples of modern architecture here … The idea came to me when I was working here. I would go out with [longtime PHM volunteer and photography maven] Jan Thacher and start photographing. Once we started, what became obvious was the wide range, from Durisol homes built in 1946 to present-day examples. Eventually we approached homeowners, and were received positively, on behalf of the museum … People who live in these homes love these homes and understand the intellectual drive behind them. Most of the people are the original clients — they all stayed in their homes. Of course, some homeowners chose not to be included, for privacy reasons.”

Why are there so many of these homes here? For Weilbacker, the answer is simple and comes down to topography: “For years, since the 19th century, people have been drawn to the natural beauty of the area and started building, in particular, weekend homes, situated in extraordinary surroundings, and those surroundings became a significant part of the whole experience of these homes. They’re mostly glass and geometric shapes, inviting nature in and looking out to nature. The architects and owners became conscious of views, the surrounds, how each house was situated.”

One home inspired another. According to Weilbacker, “Local designers knew each other and so Joe Chapman was aware of Frank Dushin, Robert Rhodes knew Joe Chapman, Adam Yarinsky was aware of Rhodes, and so on.”

With such bounty to choose from, limited space at the museum meant winnowing down what was available, eventually choosing to feature the work of 10 architects and two architectural designers. All of the 17 residences (plus one studio) are located in Philipstown, largely in Garrison. The curators were assisted in the selection by one of the architectural designers featured, Joe Chapman, who was able to direct them to other worthy properties. This exhibition is dedicated to him. Architect Frank Dushin’s son, Russell Dushin, helped select from his father’s many local designs.

Many of these homes are hidden in the woods, obscured seasonally or year-round by foliage and natural features; often they are perched at high vantage points, commanding views north, south and, occasionally, both directions. 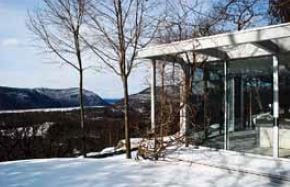 Museum notes describe the reason for the popularity of this type of architecture in this area: “Since the 1830s, the Hudson Highlands has appealed to city dwellers wanting to establish a country home not far from New York City. They have been attracted by the scenic beauty of the Highlands, with its river views, high elevations, and picturesque, hilly, stream-filled woods rugged with boulders. From the mid-20th century on, an increasing number of individuals, attuned to qualities of modern architecture and interrelationships between residences and carefully chosen sites, have built or bought architecturally significant homes in eastern parts of the Highlands.”

The earliest home featured in the exhibit will be one made from Durisol, a building material manufactured for a time at Denning’s Point in Beacon, with a hollow interior into which insulated material was placed. Durisol was manufactured with the idea of creating pre-fabricated housing, and indeed was used for that purpose, but was also used in the construction of four houses, built by different architects, in Garrison. One of these four is, according to Weilbacker, considered the “best surviving example and we know that Edward Durrell Stone was responsible for the design.”

On the other hand, two homes featured, one designed by the firm of Hanrahan Meyers and the other by Toshiro Mori, have only recently been completed.

Most of the displays will be photographic in nature, augmented by models, sketches, elevations and plans where available. Some architects are local and have worked largely locally, while others, like I.M. Pei and Toshiko Mori are world-renowned and worked/have worked in the area infrequently or just once — Pei adapting a barn into a residence in the 1950s.

Grace, who is the PHM curator, has a Ph.D. in art history. Her focus at the time she obtained her degree was modern art, including modern architecture. She described the structure of the exhibit: “Each home featured will be represented by an average of five photos, largely taken by professional architectural photographers, some of whom loaned us their photographs. Notes with the photos will include the dates of construction, the exterior materials used in construction and design and its main characteristics — there will be no evaluation given on an architectural level, design-wise.”

Each description will include a paragraph on the relationship of the house to the setting. A photograph of each architect will be included as well. Digital PowerPoint presentations will supplement images displayed on walls.

As to the homes themselves, Grace said: “Some are on diagonals, and some are cantilevered so they are not ‘pure’ examples of modernism, but there is enough in terms of clarity of form and use of glass to include them under this aesthetic. The real reason for this exhibit is the relationship with the setting, otherwise, what’s the point? It’s a special place with its rugged terrain and river and mountain views. The locations are marvelously dramatic, picturesque and some possess what are among the greatest views of this area.”