Voters go to polls May 20

Voters in the Haldane and Garrison school districts go to the polls next Tuesday, May 20, to decide on multiple propositions and elect trustees to Boards of Education.

In the Haldane district, the school budget, a proposition to purchase a new school bus, and the creation of a reserve fund for turf repair are on the ballot, as well as a contested trustee race. The 2014-15 budget includes a 1.09 percent tax levy rate. The school bus and turf repair proposals do not impact the tax rate. 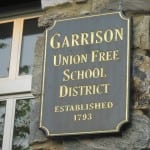 In Garrison, voters are asked to approve the 2014-15 school budget and elect two new trustees. The budget includes a 1.92 percent tax levy rate. Incumbent Trustees Diana Swinburne and James Cannon, who have each served three terms, are on the ballot and James Hoch is asking voters to write in his name.

The Desmond-Fish Library has a proposal on the ballot that also impacts the tax levy rate. It is not connected to the school budget vote and will be decided separately. The Paper detailed the proposal on April 30.

Candidates for Haldane Board of Education Discuss Issues

Amidst staff layoffs and program cuts causing a great deal of distress for the Haldane community, two candidates for the open Haldane Board of Education trustee position participated in a PTA-sponsored forum last Wednesday evening (May 7), in the Haldane music room. Incumbent Trustee Peter Henderson hopes to retain his position after two and one-half years of service and newcomer Cathy Sapeta wants to take his place. During the 90-minute forum, the candidates first responded to questions posed by PTA President Lourdes Laifer. About 15 members of the community listened and many submitted their own questions for the last half of the meeting. 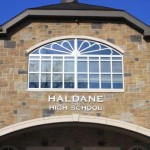 Laifer queried each candidate on their views on current and future challenges facing the district, including how to balance community needs with Haldane’s, options for managing the budget, the impact of state-mandated tests and programs, and school safety. In general, audience questions tended toward requesting more specifics from the candidates on their positions and opinions.

In his statement about the contributions he can make to the board, Henderson emphasized his working knowledge and experience with handling school issues for five semesters as a basis for many of his responses.

“I’d like to run on my record as a trustee,” Henderson said. “A few of my accomplishments include being the vice president of the board sharing leadership with Gillian Thorpe and this has been a huge year for the board.” The board hired both an interim and a permanent superintendent this year, faced difficult choices in balancing the budget and handled three sets of employee union contract negotiations, among other things.

Henderson described himself as “the board’s de facto numbers guy” and said that he had been at the forefront of budget discussions, had reorganized the Audit Committee and played a key role in contract negotiations with district employee unions.

In her statement about the role she could play as a trustee, Sapeta referenced her business sales and teaching experience to underscore the contributions she could make. She said she had 20 years of sales experience working with technology, managing budgets and personnel. Recently, she received her certification as an English as a Second Language teacher and has worked as a substitute teacher. She emphasized her creativity as an asset in addressing the many challenges that face the Board of Education, but did not offer any specific examples of how she has used this talent elsewhere.

Since one of the key issues facing Haldane is the budget, it arose in both a question from Laifer focused on options for revenue and from an audience member focused on the candidate’s experience. Henderson said, “The budget is the single biggest challenge that faces us. We were lucky forward-thinking past boards put money aside in good times in reserve funds, but at this point we have essentially exhausted those. We have to learn to live with a new fiscal normal. The tax cap has altered the environment and I don’t see it going away. We’re seeking new sources of revenue and are looking very carefully at our budget.” Henderson described his personal experience managing his own business as an asset when it comes to dealing with the school budget.

Sapeta said, “I think we need to get creative to lobby for state aid and to give reasons behind why we need to get that money. Dollar for dollar we need to look into the spending. From the last two meetings I saw, a detailed analysis in the work the board has done has been with everyone’s interests in mind. However, I do offer creativity as far as looking at new sources and getting people excited about the work that is being done here.” She mentioned recent sports victories as an example of the things to get people excited about. “Really getting creative and getting people more involved are things I want to look into further,” she said.

Sapeta described herself as “strong at math” and mentioned her work experience managing sales reps and meeting sales targets while holding down expenses and operating costs as relevant career experience with managing budgets.

A pointed question from an audience member obviously critical of the Common Core and how it was imposed on schools by the federal government and how it was funded drew out key differences between Henderson and Sapeta.

“Regardless of what you think about Common Core,” Henderson said, “it really doesn’t matter. These are standards that must be implemented by state law and districts are given a lot of latitude about how to do that. What you believe politically is entirely irrelevant. I firmly believe we have to support our teachers and administrators and families to ensure we’re as successful as we can be in the implementation of those standards.”

Sapeta said, “We should absolutely follow state law. However, if there are enough individuals within the school whether they are teachers, administration, or parents having concerns, it should all be addressed. I am so embarrassed for having thought that Common Core was good and I will do everything in my human existence to make sure that people understand what Common Core is.” She continued by emphasizing that as a school board member she knew she had to do certain things and was prepared for those responsibilities, concluding with, “If we don’t like it [the laws], we should have them changed.”

Audience questions indicated that people were eager to know more specifics about Sapeta’s motives and experience, even though the questions were supposed to be directed to both candidates. One question delved into the fact that she ran for a position on the Town Board last fall and expressed suspicion that she was seeking a political career.

“I love children,” Sapeta said. “This to me is a responsibility and I don’t see the logic in the threat of this being a political move.”

In his response to the question about political agendas and his motives for seeking another term as a trustee, Henderson said, “I like to seek out people with different opinions and find out what we have in common. We have to leave our politics at the door and focus on the issues.”

The candidates will be on the ballot on Tuesday, May 20, from 7 a.m. to 9 p.m. in room 105 of the elementary/middle school building.

2 thoughts on “School Budget and Other Issues on Ballot”