John Hughes and Theo Henderson compete for Haldane May 17, at the Northern Counties Track and Field Championships at Arlington High School.

Posting strong results May 17 at the Northern Counties Track and Field Championships at Arlington High School, Abbey Stowell earned All County honors in the pentathlon. The boys’ 4×800-meter team (John Hughes, Jonathan Clemente, Nick Farrell, and Theo Henderson) earned an All County Honorable Mention (second place). They ran 8:23.6 and placed second within a hair of the third place team to win with a photo finish. 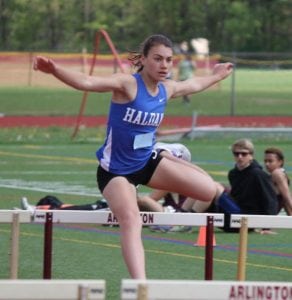 Haldane’s Abbey Stowell won the pentathlon event at the Northern Counties Track and Field Championships May 17.

Coach Kelly McAvoy credits the complete effort of the varsity team for the overall score, an indication of their hard work this season.

The track teams competed Wednesday (May 21) at the sectional championships at Valhalla. The girl’s’ team finished fifth and boys’ team finished sixth. In advancing team scoring, the following athletes turned in key performances: 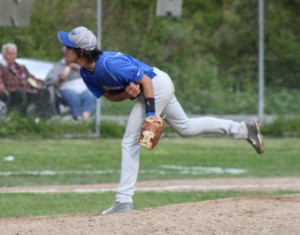 Top seed Haldane faces Hamilton for the Class C Sectional title at 4:30 p.m. on Friday, May 30, at North Rockland.