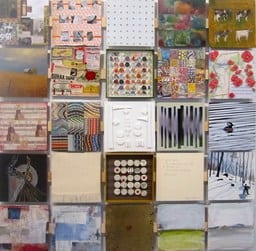 A few of the parts which made up the whole of the 50-50 ”mosaic” displayed at Garrison Art Center.

From that beginning, 50 years ago, the Garrison’s Landing fixture has served a wide community of Lower Hudson Valley artists and art enthusiasts through its mission of promoting the creation, exhibition and enjoyment of art. This year the center has been celebrating its half-century anniversary with not just one fete, but a series, continuing June 14, with a gala titled “OFF the WALL: An Experience Art Center Style.”

OFF the WALL honors 50 supporters, winnowed down, says the art center’s director Carinda Swann, from around 200.

“We had brainstorming sessions on how to celebrate and we determined we needed a gala for a fundraiser,” Swann said. “We used to do very creative ones — we had “Leonardo Da Vinci” on the dance floor at Tallix Foundry; an all-female swing band at Osborn Castle. They were always creative, but they were supposed to be fundraisers but that creativity was very labor intensive and though a bit of money was earned, it was not enough to justify what we were putting into it. So, we switched to little parties in people’s homes, always with a creative or artistic element or theme — one was about joke-telling, another sushi-making.

“Ultimately, for our 50th we decided to go back to having a big shindig, but we also decided that a sit-down dinner was not the thing, and that a multi-media art performance was more our style. We learned of the Cave Dogs through the 2013 New York City Fringe Festival.” This group will be performing the same piece, Sure-minded Uncertainties, described by Cave Dogs as “an exploration of science, technology and nature through the alternative lenses of micro and macro perspectives, situations and experiences. A range of fantastical characters and modern day archetypes, including a scientist, a naturalist, an ancient wise woman, a tailor and a chrysalis, navigate a series of transformations throughout four scenes. The performance presents vibrant storytelling, merging ancient traditions, shadow puppet theater and contemporary art forms — including film, video, sound and computer-generated animation.” 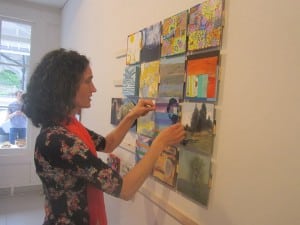 Artist Bettina Utz adds her contribution to the ”mosaic” assemblage at Garrison Art Center prior to the mini-benefit last week.

All will take place outside the center’s doors (“We needed to be home,” says Swann.) at Garrison’s Landing, rain or shine, with partygoers partaking of hors d’oeuvres from Fresh Company and what is billed as a “surprise feast for the eyes” (Swann kept mum on details) organized by Carolyn Rossi Copeland. An anniversary toast will cap off the evening, which is chaired by Jane and Ivan Chermayeff, Susan and Glenn Lowry and George and Libby Pataki.

Tracy Strong, a former director of the center and a presence there for 30 years, will be the evening’s special “Gold Star Honoree.” Strong, says Swann, “is involved with everything we do here: from teaching and designing invitations, to labeling envelopes, sweeping the floor and making the vichyssoise!” The latter was served up May 23, at another of the celebrations, the 50/50 Exhibition, a benefit for the center’s education and exhibition programs. There, 100 wheel-thrown cups, each with a volume of 50 cubic inches, made by master potter Lisa Knaus, were displayed and available for sale. Once sold, they were filled with soup for the purchaser, with 25 percent of proceeds donated to the Philipstown Food Pantry.

What remains of that exhibit is on view (and may still be purchased) along with a collaborative installation by more than 100 area artists in the adjacent gallery. The artists each worked on 50-square-inch blocks which were then assembled and compiled into larger “mosaics” devised by James Murray, which sold for — the theme continues … $50 each. Both exhibits will be on display until June 22; much has already been sold.

An October event, Rollin’ On The River, concludes the 50th festivities. Free and open to the community, the day will feature steam-rolling printmaking, with a steamroller run by Charlie Polhemus aiding in the creation of giant woodblock prints. There’ll be multiple “stations” to create prints, and specific times allocated to various printmaking constituencies — from kids to adults who have never tried this before — to the experienced. Mix in food trucks, music workshops and a pop-up showing of the works later in the day, and it promises to be a fitting capper to a year of celebration. 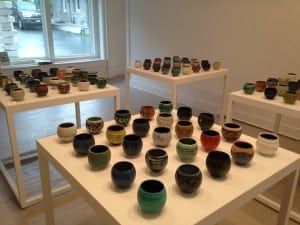 A sampling of the 50-50 cups created by Lisa Knaus, sold at last week’s mini-benefit.

Simply surviving these 50 years hasn’t been a fiscal piece of cake for the art center. A New York State Council on the Arts $20,000 grant represents just five percent of their half-million dollar yearly operating budget — the rest comes directly from the community.

“It’s heartening that the community believes so much in this little place,” says Swann, who notes that about half of these supporters are artists themselves, with the balance composed of “art patrons and admirers, and parents who understand that art education is important.”

With a bit of longevity in place, people connect then reconnect at different life stages: a little boy who participated in a children’s art program (taught by Swann, originally associated with the center as a teacher in 1993; she has been director since 2008) is now the young man who acts as gallery attendant on Sundays. And founding board member Marit Kulleseid rejoined the board 50 years later.

With an ever-increasing range of classes, workshops and exhibits, self-examination plays an important role in the art center’s move forward.

“We try to assess what we’re doing well,” notes Swann. “We do evaluation forms for most classes. We try to figure out what people want. We offer a lot and see what fills and sometimes even if we have just a couple of people interested we’ll run it at a deficit just to keep it going and generate more interest later.”

In recent years the center has collaborated with other local nonprofits, for instance presenting CURRENT, the annual sculpture exhibit where works curated by the centerare displayed on the Boscobel grounds, with proceeds from sales of sculpture endowing the Garrison Art Center’s Gillette Scholarship Fund.

Swann keeps a careful eye on growth, however. “It is wise to be mindful of how much to let the organization grow,” she says. “It’s very important to be careful about not overgrowing. I sort of think we’re at the point of keeping our budget where it is rather than expanding. At present we’re meeting the needs of our constituents. We are limited by the amount of space we have — which is not necessarily a bad thing because it forces you to be efficient in what you store, both concretely and subjectively, in your decisions.”

Tickets to the June 14 benefit should be purchased by June 2. Contact the art center at 845-424-3960 or visit garrisonartcenter.org.

Gold Star Honoree Tracy Strong became affiliated with Garrison Art Center more or less upon her arrival in the area in 1984. Stopping by the center, hoping to obtain studio space there, she was instead asked if she was interested in becoming a part-time director.

I thought, “maybe I could do that” — despite having no experience whatsoever — I interviewed with John Allen and it seemed simple: a keep-the-office-open kind of thing, around 15 hours a week. I worked 70 hours that first week and I was hooked! The board was made up mostly with creative people and it was the kind of place where if you had an idea of something to try, then just come and do it. For example Cecile Lindstedt thought of a mentoring program, and we also got a gallery open during those first two years as well. The craft fair got organized and we resurrected Artists On Location — we needed fundraisers. The idea was pretty much to try to support ourselves and get opportunities going.

I worked as director for five years, then Sarah Geer took over and really got the printmaking studio going. Libby Turnock came in, made it grow even more and then with Carinda [Swann] it exploded even more. Every one of them has had ideas and has been able to accomplish them … Different people have done different things and left their marks … And we always keep the door open for anyone who has a new idea. That still resonates very loudly there. And it’s not just the artists, it’s the supporters, too — it’s a symbiotic relationship.

It’s been through a lot of different things but there have been no real setbacks. There’s always been a very positive energy, often because of the board. In my 30 years on the board there have never been real conflicts; discussion always leads to a better solution.