Programs aim to provide summer park use for nearest neighbors

In the recent past, summer at the Taconic Outdoor Education Center (TOEC) has been, in terms of events and programs aimed at the nearby community, the slow season. Things have changed this year, as TOEC shares a host of new environmental education programs and initiatives geared to serve neighbors.

These new programs have come to life supported and driven through a private donation made by Dr. Lucy Rockefeller Waletzky, current chair of the New York State Council of Parks, to various area parks, including Fahnestock, the Hudson Highlands State Park, FDR State Park in Yorktown and Lake Taghkanic State Park in Ancram. A goal of the donation was to diversify education and activities within the parks.

At Fahnestock, this has translated into a number of new programs. The first, initiated earlier in July, is a series of public family nature programs, all held at Hubbard Lodge, 2920 Route 9, Cold Spring, under the umbrella title of “World Wildlife.” 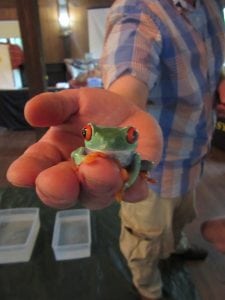 A South American red-eyed tree frog, as displayed at Hubbard Lodge at a World Wildlife program.

The first session introduced participants to the “important obligation, responsibility and accountability questions associated with exotic and non-native wildlife pets” while the second, titled “Lamp Post Critters” took place this past Saturday evening, in a naturalist-led investigation into the nocturnal and secretive life of moths. This program was held both indoors and out for some post-talk moth spotting.

The series continues on Aug. 2 from 11 a.m. to 2 p.m. with Secret Life of Toadstools; the description reads: “Join Steve Rock, mushroom enthusiast, for a fascinating walk to learn about the secret lives of mushrooms, their role in nature and how to identify a variety of mushrooms found in the park. There is a suggested donation of $3 for adults and $2 for children.

This will be followed by Wolves in New York — Fact or Fiction, on Aug. 23, from 6 to 7 p.m. In this always-popular presentation, attendees will be able to meet Atka, the live wolf ambassador from the Wolf Conservation Center and learn about the life history of the wolves in North America. “Discover the challenges facing this once abundant predator and their unique role in keeping the environment in balance,” the description reads. There is a suggested donation of $7 for adults and $5 for children. Pre-registration is advised, as the lodge holds only 40 people. 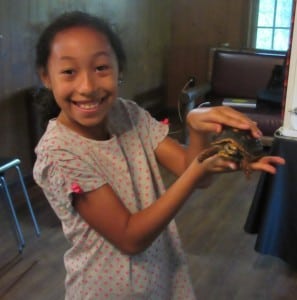 A delighted attendee holds a turtle during the first World Wildlife program.

One might digest this information as simply ‘another nature program’ — a description given by TOEC’s director Paul Kuznia of the first presentation. In the presentation, Chris Evers, director and founder of Animal Embassy of Stamford, Connecticut, brought a number of rescued animals from around the world, which were adopted from unsuitable circumstances in the tri-state region. He illuminated why these programs can be so instrumental in getting children to think about some of the hard questions which nature brings to us.

Wildlife included a North American soft shelled turtle, African bullfrog, Eurasian eagle owl, red-footed tortoises, chinchillas and red-eyed tree frogs from South America. They all had special stories concerning their travels and survival. Unlike traditional pets, Evers mentioned that the animals he brought require special treatment regarding shelter, food, time commitments, and space, and are best adapted to the weather and special circumstance of their native lands. They come with a variety of unique needs, making survival in our neighborhood almost impossible if they escape or are released. Evers conveyed an important message about the life-long responsibility and legitimacy of acquiring wild animals for pets with thought to the long-term welfare of the animal. As an example, the red-footed tortoise can live to be over 150 years of age. He stressed the point that all these critters were once family pets, and are native to other parts of the world, but how they were often released into the wild when the pet owners became overwhelmed.

Also taking place this summer at TOEC are Owl Prowl walks. Largely designed for the many overnight visitors who use the campground at TOEC, these prowls consist of an interpretive walk to call owls, with educators bringing along handheld Firefox audio units with speakers which they use to “broadcast” calls to attract the attention of the four species of owl found in those woods, the predominant species being the barred owl. While these walks have yet to occur on a set schedule, if you are interested in participating, contact the TOEC. 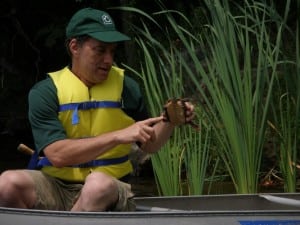 The other major initiative this summer comes in the form of a boat and a paddle. Each Saturday and Sunday through Labor Day, through the Nature on the Move program, TOEC staff will lead two-hour nature canoe tours on Canopus Lake. Offered at 10 a.m. and 2 p.m., participants, (no one under 5, no pets allowed) will be provided with basic instruction (no experience necessary): the strokes, getting in and out, etc., and will follow an environmental educator on a paddle around Canopus Lake, keeping an eye out for, in TOEC program director John Stowell’s description, “fascinating bird nests hanging under cliffs, geology and landforms, vegetation and anything else which comes up — it’s an ‘open’ trip and whatever presents itself, we’ll run with it. We’re trying to think more outside of the box so instead of the usual trail walks, we’re doing something similar out on the water.”

Notes for the program give further information:

Explore Canopus Lake’s unique rocky ledge shoreline that has a feel of an Adirondack Lake and learn about the critters and plants above and below the water’s surface that make the lake their home. Check out a painted turtle, observe how beavers and other secretive creatures impact the shoreline. Listen for the distinctive calls of birds that nest on the adjacent cliffs and view their hidden nests. If you’re lucky, there is a chance to see a beaver or otter. The landscape that surrounds Canopus also has environmental history tales to share — from the iron ore that attracted miners in 1890 and the influence of the Civilian Conservation Corps in the 1930s.

The cost is $10 per person and pre-registration ensures a spot on one of the seven canoes. All equipment, including a life preserver, is provided; bring sunscreen and water. Meet at the Canopus Lake boat ramp a quarter mile west of the park office.

Safety on the trails

Outside of Fahnestock, there are trail stewardship initiatives going on at Washburn Trail, located across from Little Stony Point. Most Saturdays and Sundays from 10 a.m. to 5 p.m. trail stewards set up a welcome table, largely, according to Stowell, “to educate people, especially those who might not be avid hikers. ‘Do you have the right shoes on?’ — ‘Do you have a map?’ — et cetera.” The stewards promote education as well as safety.

“We also put out a dog bowl with water and have containers of water for hikers. Most of what we are doing is safety-oriented,” Stowell says, adding that the “eventual goal is to do interpretive walks, maybe up to the ruins” but for now “we are trying to have two staff members there every weekend, one at the base, and one up a ways on the trail.”