Jeeze, THAT was quick! No sooner had it registered in my consciousness that the autumnal equinox was upon us than it seemed like the leaves turned colors overnight and began to drop in bushels.

A chill has been in the air for weeks now and the apples and fall squash and pumpkins are beginning to fill out the farm markets. But what caught my chef’s eye last weekend were cranberry beans. While I’ll spend the winter honestly enjoying dried heirloom varieties of beans of all stripes — and as ordinary as they might seem to some — the last of these fresh shell beans are a seasonal marker. 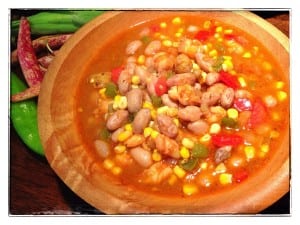 Along with corn, peppers and tomatoes, they also constitute the motherlode of ingredients that are the culinary gift of the New World, the backbone of global cooking. And once again, there is no better way to celebrate the cycle of this season with a combination of the three and no better place to look for precedents than to revisit some native and early American recipes.

Let’s start with succotash, a colonial variation of the Narraganset Indian word “Msickquatash,” translated roughly as “an ear of corn.” A basic recipe for this melange was common among most of the Algonquin, Iroquois and Mohegan tribes of the northeast and generally described a big simmering pot of corn and seasonal shelled beans seasoned with peppers and tomatoes.

Full disclosure: I am not a Hudson Valley native. I was born and raised on another river — the Mississippi — specifically in South Louisiana, another sort of large simmering pot of cultural blending. Not surprisingly, with a similar pantry the local Choctaw tribes there had a similar preparation, once modified by the Creole culture of the River Road became maque choux.

The name is derived from the Creole word for corn — maque — and the French word for cabbage — choux. (Curiously in all the years and in all the variations I’ve happily eaten it, not once has a sliver of cabbage passed my lips. But that’s South Louisiana for you.) It differs from succotash in specifics — more often than not including local fresh lima beans with the addition of a substantial animal protein — occasionally chicken, but in South Louisiana, more commonly shrimp or crawfish. This is the version I’d like to offer you this week.

Maque choux is a relatively quick meal and pretty efficient from a cook’s point of view — the beans, corn and shrimp are simmered in a quick stock made from the shells of the shrimp. I added a handful of fingerling potatoes (also from the New World larder) as they were in the market and accentuate the “chowdery” nature of the dish I was imagining for a cool, fall evening.

The seasoning is basically the so-called “holy trinity” of Creole cooking — onions, bell pepper and celery, and of course garlic. If you like a little heat, add a pinch of cayenne. And although I’ve omitted his suggestion, the authoritative Creole writer-restaurateur Lafcadio Hearn recommends finishing the dish with the addition of “a knob of butter as big as a hen’s egg, rolled in flour,” whisked in and simmered briefly to thicken and sweeten it just before serving.

And although this version does include shellfish, you can make a satisfying version omitting the shrimp and substituting vegetable stock. And if you’re not opposed, in either case a ¼-cup or so of diced bacon fried with the onions at the beginning adds a nice smokiness.

¾-to-1 pound fresh shrimp, peeled and cut into ½-inch pieces (reserve heads and shells for stock)

Heat 2-3 tablespoons olive oil in a 2-quart saucepan. When the oil is hot, add reserved shrimp shells and heads, stirring for a couple of minutes until they color. And three cups water and bring to a boil. Reduce heat and simmer for 15 minutes. Strain and reserve for recipe above.