Cider — hard, fermented, alcoholic cider — is riding a rising tide of popularity. Often thought of in the autumnal glow before Thanksgiving, cider, especially Hudson Valley-based varieties, are seen by a growing number of consumers as another year-round choice for drinking alone or as an accompaniment to meals. 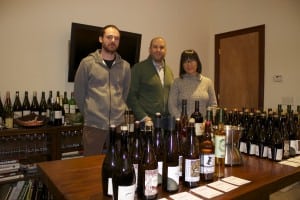 “Cider is more and more popular every year we’ve done this,” said Tim Buzinski of Artisan Wines on Beacon’s Main Street, as he presided over a tasting session last Sunday (Nov. 16) afternoon in celebration of the beginning of Cider Week. The marketing gambit is intended to draw more attention to the product and the growth of its manufacture particularly in the Hudson Valley.

“This helps maintain another outlet for apple orchards in a highly competitive market nationally and internationally. Making hard cider increases the value of the apples that are used and creates a more sustainable model for the orchards,” said Buzinski.

Buzinski credits Philipstown’s Glynwood Farms with providing much of the inspiration and information for cider-making and marketing. “They are the engine that pushes and drives the national cider revival,” he said. Glynwood, a nonprofit with a mission to assist farmers in the Hudson Valley, also had a tasting event last Saturday (Nov. 15). Several other tasting and cider-related events are being held in the region and can be found at ciderweekhv.com.

The re-emergence of hard cider as a business is also tied to the history of the Hudson Valley region, Buzinski explained. Immigrants from Europe, especially England, brought seeds and plantings for apple trees to the area during the early days of settlement. Fragile grape vineyards were difficult to establish, so wine struggled as an industry. And with pure drinking water and other liquids not easy to come by, cider (and beer) played an important role in providing liquid refreshment and respite from the vagaries of what was for many a hardscrabble life. The legacy of the orchards and cider-making informs the excitement around reviving it as a business today.

A selection of local ciders.

Buzinski, who loves talking about alcohol and food pairings, stressed that cider offered multiple opportunities for interesting combinations in the same way wine does. He said the natural acidity of hard cider offered the refreshment of a white wine, but that the presence of tannins also suggested some of the characteristics of a red wine, all dependent on the variety of cider chosen.

He said cider is easily paired with a number of cheeses and can be also be used together with chicken, pork and seafood dishes, including use in the cooking process. He also said lighter ciders could be effectively combined with vegetarian meals using grains and beans. “There is a large range of possibilities,” Buzinski said. He further discusses cider’s food potential in the brief video below.

Video and photos by K.E. Foley