There’s a very good chance that if travelers and commuters along it were asked for the first word that comes to mind as they drive the Taconic State Parkway, it would not be “food.” One little shop, part of a much larger network, is starting to change that perception.

Located on the Taconic 10 miles north of Route 84, the Todd Hill Project is part of Taste NY and offers visitors an array of food products all from New York state, many from the Hudson Valley and including several from Putnam County. In addition to a year-round retail store, Todd Hill will also offer an outdoor farmers market this summer. 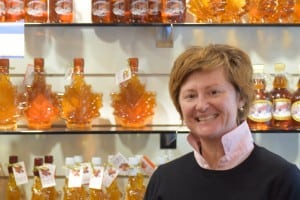 Lachele Coninx-Wiley, market manager at Todd Hill, is well known to Philipstown food lovers, having helped manage the Cold Spring Farmers’ Market for nine years. She told The Paper that when people pull into Todd Hill, “They’re surprised we’re here … and to find a magical oasis right in the middle of the parkway.” The store is literally in the middle of the Taconic, in the median, housed in a small building that many years ago served as a gas station.

An oasis for foodies

The “oasis” that Coninx-Wiley describes offers everything from meat and dairy products to fresh, seasonal produce and packaged goods. “Our primary focus is retail-ready and farm, value-added food products,” she said. “Our No. 1 bestseller right now is a 16-ounce bottle of Hive Mix Super Honey.” The popular and very wholesome honey product is made at Hummingbird Ranch near Staatsburg. 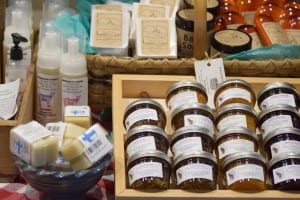 The Todd Hiil Market offers many value-added food products, meat, dairy and fresh produce in season. Shelves and coolers are stocked with goods from more than 60 suppliers including several Hudson Valley farms.

One of the challenges Coninx-Wiley faces in operating the relatively small shop is the limited amount of space for refrigeration. As a result, meat products that are delivered fresh are frozen on-site.

The Todd Hill Market opened its doors less than a year ago in June 2014 but is already attracting up to 5,000 visitors a week. According to Coninx-Wiley, key visitor groups to date have included weekenders headed to the Berkshires, skiers, Lake George–bound travelers and Canadians headed south.

Most are first-time visitors to the new store, although, she said, “We’re starting to see repeat business from Westchester.” Local customers are also starting to appear. Coninx-Wiley said that a number of local real estate brokers have taken to purchasing Todd Hill gift baskets for their clients. 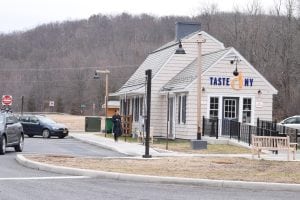 The Todd Hill Market is located on the Taconic Parkway 10 miles north of Route 84. A farmers market will be operate on Fridays and Sundays this year starting in June.

Foot traffic is definitely bolstered by the fact that the site also serves as a “text stop” as well as a rest area — a rarity along the Taconic. The market offers coffee, tea, baked goods, ice cream and other refreshments, including Brooklyn-made Bruce Cost Ginger Ale, which Coninx-Wiley said is carving out an increasingly large niche among travelers. When customers ask for a Coke, a product not offered at the market, she and her staff encourage them to try a Bruce Cost or other regional beverage instead.

The shop also a meets very practical need — one that doesn’t hurt attendance. “We have the only restroom on the Taconic between Westchester and Massachusetts,” Coninx-Wiley laughed.

The outdoor market will run from June 5 to Oct. 18 and will be open on Friday and Sunday afternoons. “We’ll have six or eight vendors,” stalls that will feature fresh local produce, Coninx-Wiley said.

Taste NY’s Todd Hill Project is an initiative of New York State Department of Agriculture and Markets, in partnership with Dutchess County Cornell Cooperative Extension. Taste NY also operates a number of other stores in major locales such as LaGuardia, JFK and MacArthur airports and the Javits Center, as well as at numerous service areas along the New York State Thruway. The larger urban centers feature New York state beer and wine, product lines that Todd Hill isn’t yet licensed to sell. 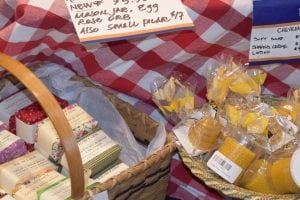 Locally made baskets filled with foods and other New York State products are becoming a popular gift item.

Todd Hill Market is open year-round, six days a week and closed on Tuesdays. Normal hours are from 10 until 7 with the market staying open an hour later on Fridays and opening an hour later on Sundays. Between Memorial Day and Labor Day, hours will be expanded with the shop open from 9 to 7. The market derives its name from Todd Hill Road, which is the closest exit on the Taconic.