Open Book’s third album title, Grateful, is straightforward — it means just that: “It encompasses how we feel about our lives; we’ve sifted through a lot,” said Michele Gedney, the distaff half of the singer-songwriter duo (and Philipstown.info/The Paper’s advertising director). Her on- and offstage partner, Rick Gedney, agreed.

The pair, who moved to Philipstown five years ago after rediscovering it while coming here to play music, have performed up and down the Hudson Valley and beyond.

Their earlier efforts, Out of Time and The Things We Keep, released in 2002 and 2006 respectively, which received national airplay on over 100 radio stations, found them at very different emotional junctures than their current, more contented state, something reflected in their recent recording project.

Eight years later (they’ve been married for two), there’s a deeply shared history, as well as the experiences of life’s unexpected hurdles and pleasures, and Grateful sings out in that complicated but hopeful voice.

“It’s a collection of songs we’ve been playing for a long time,” said Rick, “a collection which makes sense together.” 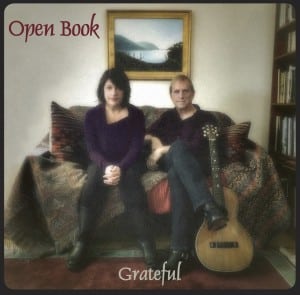 Rick has only penned one song on the new CD, “because he’s been so busy painting,” noted Michele. Handily, Michele has made up the difference and then some. “I’ve written hundreds — most never make it anywhere. We have this backlog of songs which we finished, but never finessed. When we moved to Cold Spring, we started bringing some of them back, because they were new to listeners, and some are on this CD because we felt they were still very relevant.”

Sometimes songs of the past and present join to express similar sentiments about very different times of life. For instance, Michele’s song “Learning to Fall” was written nearly 20 years ago as she watched her daughter Lindsay skateboard down the driveway:

I was standing in the kitchen, wanting to run down, and then I realized that was crazy, thinking she’s got to be able to do things I find frightening. When she went away to college, I felt those things again and started playing it again; we rearranged it. Now I’ve written another, more or less about the same thing. After college, Lindsay came up for the day. She and I went to the same concert, the National, who were playing at the Living Room, together, but separately, as she went off with friends. I realized that that was her life now. I wrote ‘This Is Yours Now’ that same night. I took a lot of the chords the National were playing and it just came out fast.

Other songs have different provenances. “Butterfly,” a newer song, was written about a time Michele was doing an after-school music program for autistic children. “That’s about how music can help anyone transcend.”

Rick’s songwriting process, and what emerges from it, is different. “I tend to write in the third person,” he said. This approach is reflected in his song “Second Chance,” where Rick writes about fictional characters who may or may not take the opportunity to find happiness.

What makes Grateful particularly special to both Rick and Michele is their from-scratch, hands-on recording.

“We recorded it at home, mixed it in Beacon and mastered it in Catskill. Everyone who played on it lives within a half hour of here.” Michele explained: “Our intent was to deconstruct the production. The sound on this record is very simple, just our acoustic guitars and vocals, bass and drums, with added violin and lap steel guitar on a few songs … This showcases more the two-vocals, two-guitars harmonies that we do, which is kind of our thing. There are a lot of male-female duos — one’s playing guitar, one’s singing or they’re in unison. We’re never both playing or singing the same thing. We’re always singing harmonies, playing different parts.”

Rick continued, “We play inversions of the same chords, but in different forms, and this gives it a lush sound.” 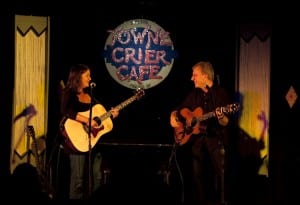 Open Book during a performance at the Towne Crier.

The two do not actually sit down and write together. “We each have our own process, and then we come together to arrange, but I do think we inform each other’s writing organically.”

Rick and Michele are indeed grateful to be living in Philipstown. Rick said, “This is the little town I’ve always dreamed of living in.” Michele agreed: “Our move here was prompted by the love of the area, friends, Rick’s wanting to paint; it’s been amazing.”

Rick’s painting, his other creative force field, has occupied much of his time over the past few years. An art major in college, he put it aside for decades before returning, painting realistic yet also expressionistic Hudson River landscapes, some of which are exhibited at Riverwinds Gallery in Beacon. He shifts, sometimes uneasily, between the two artistic pursuits. “You can do both, but maintaining the energy level is tough. I always have a guitar nearby when I paint, take a break sometimes, jot song ideas down.”

Open Book is celebrating the release of Grateful with a party at 69 Main St. on First Friday, May 1, at 7 p.m. Copies of their CDs will be available for signing, and Grateful will be sold at a special, pre-release discounted price of $10. Grateful is available on CD Baby and iTunes. There will be an exhibit of Rick’s paintings, along with those of Philipstown.info/The Paper’s layout editor, Kate Vikstrom, who also did the graphic design for the album cover of Grateful.