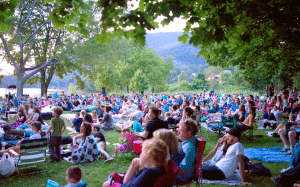 The crowd enjoys a screening on the Cold Spring riverfront.

If dinosaurs at sunset aren’t your thing, go for classic pairings: Katharine Hepburn and Cary Grant light up the screen on July 11 in The Philadelphia Story (1940), and Jimmy Stewart and Grace Kelly shine in Hitchcock’s thriller Rear Window (1954) on Aug. 22. Not cool enough for you? How about Paul Newman facing 50 eggs in the 1967 favorite Cool Hand Luke or Harrison Ford as the dystopian replicant hunter in Ridley Scott’s sci-fi masterpiece Blade Runner (1982). From Hitchcock to Disney, Tom Cruise to Sean Young — this summer film season has got a star-studded something for every taste.

All films start at sunset in Dockside Park (entrance just north of the Cold Spring bandstand). Admission is free and open to all.

Visit coldspringfilm.org for the full schedule or to make a tax-deductible donation.