What was there before that no longer exists?

Melissa McGill may have had the same flights of fancy as many before her have had, upon spying the incongruous, fanciful, ragged ruins of what appears to have been a castle overlooking an uncharted Hudson kingdom. Spotting the abandoned yet still noble remnants out of the corner of her eye for fleeting seconds while traveling back and forth between New York City and Beacon after her move there nine years ago, McGill wondered, as others have, what was it, why was it there, and what “there” was — the there being the intriguingly named Pollepel Island, so close to the shoreline, a shade north of Breakneck Ridge.

Unlike others, McGill did not become merely starry-eyed at the sight of it, simply letting her imagination wander. Instead, she took her curiosity and let it lead the way through a thicket of questions, partial answers giving way to more questions, and then, finally, ideas prompted by all she gleaned. This intellectual and artistic process, almost as challenging as the castle and the land it stands on, has resulted in Constellation, a public art installation project that debuts, after three years of planning, on Sunday, June 28, remaining there until the summer of 2017. (For more summer events scheduled for Bannerman Island, click here.) 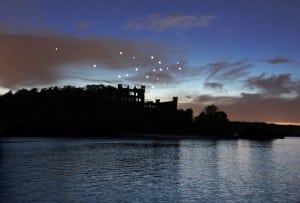 Artist rendering of Constellation (Evening).  Image courtesy of the artist

Constellation is just that, a new graphing of connected “stars” in the Pollepel galaxy: a series of 17 “slender tapered aluminum poles, installed on the island at heights ranging from 40 to 80 feet tall, creating a visual vertical rhythm around the ruin, drawing the eye upward while accentuating ideas of absence versus presence. Small lights (solar-powered LEDs) are installed on the top of each pole, giving the appearance of each light floating independently in the night sky,” in the artist’s description.

“I remember riding on the train and always hearing people on the train wonder what it was,” McGill recalled. “I asked lots of people about it, and though many had lived here a long time, most weren’t exactly sure and hardly any had ever been there.”

For McGill, this embodied the tantalizing questions of absence and presence in space she has been consumed by and working with, conceptually, since her days as a student at Rhode Island School of Design (RISD). “I thought about what was missing there, what was there before that no longer exists; what is it now and how do people see it now? I’ve always been attracted to those themes. After RISD I lived in Italy for two years. You see bits of history in the contemporary world there constantly — and they merge. I’m interested in how history is reflected in contemporary life. … Because Bannerman’s history on the island is so recent … I took an old photograph of the island and superimposed it over a recent one, using it as a reference, and that’s where I got my idea.” That idea is to produce one set of lights that reflect the structure and another set that reflect the landscape, thereby creating a brand-new, melded constellation in the sky.

Interested in the pre-Bannerman era, McGill was introduced to Hadrien Coumans, of the Lenape Center, an organization whose mission is to “build a pathway for indigenous people between inherited cultural traditions and the dynamic innovations of contemporary global society.” 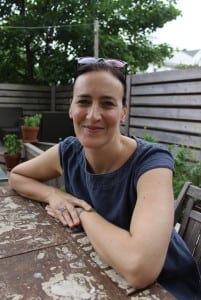 Melissa McGill, in a rare moment of calm. Photo by A. Rooney

The Native American Lenape are indigenous to this region. When McGill explained the nascent project to him, he immediately said, “That’s Opi Temakan, the ‘White Road’ or ‘Milky Way’ connecting our world with the next.” McGill said, “Hadrien was very excited about having a project giving a contemporary context to this belief, because those beliefs are not often manifested in a contemporary way.”

Early on, extremely mindful of the myriad of effects this project could have on the landscape that gave birth to it, McGill met with a host of environmental organizations, including Riverkeeper, Scenic Hudson and the Hudson Highlands Land Trust, all of which have provided input.

Concurrently, McGill approached the National Parks Service (Pollepel Island is part of the Hudson Highlands State Park) with her idea and found herself pleasantly surprised at how they embraced it. “This year happens to be a centennial for them, with an ‘Imagine Your Parks’ theme, so the timing was amazing,” she noted.

Attention then turned to the key component of the project, the 17 lighted poles that form the “constellation.” “There were many structural decisions,” McGill said, “and I worked with Dick Polich [of Policy Tallix Fine Art Foundry] who is very experienced. He was really excited — they install all over the world and this was right in his backyard. We had many meetings about how to install poles that high in the Hudson River. It started as a constellation and now it’s a galaxy!”

The poles, made by Beacon’s Niche Modern, are painted in colors that blend in with both the environment and the ruins so they become less visible as they rise into the sky. Lights are installed on the top of each pole, giving the appearance of each light floating independently in the night sky.

With a project on this scale, much of McGill’s time during the past few years has been spent fundraising. Hampered by the difficulties in obtaining grants as an individual (rather than a group), McGill nevertheless received funding from the National Endowment for the Arts, along with smaller grants, support from individuals and an Indiegogo campaign. She was assisted in much of this by Creative Time Director Anne Pasternak, whom McGill calls a “generous, thoughtful and inspiring mentor. And there’s a long list of others as well — people at Dia, David and Peggy Ross, Allison Cross from Manitoga — so many people; I’ve been honored and humbled by the support and guidance I’ve received.” There are, as there always seem to be, “still some funding gaps to close,” McGill reported. 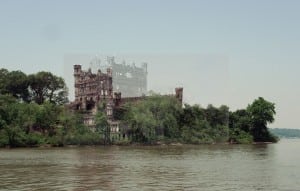 ‘Artist rendering juxtaposing historical and recent photographs, with stars marking a path between past and present’ – Melissa McGill (Photo courtesy of the artist)

There will be many ways, means and times to gaze up at Constellation. Official two-hour sunset cruises on the Estuary Steward, operated by the Bannerman Castle Trust, will depart Fridays and Saturdays at 7:45 p.m. now through the end of October from the Beacon Institute Dock, located on Red Flynn Road, across from the Beacon train station. All tours must be reserved ahead of time. The boat takes about 30 minutes to reach the island, and there will be an audio guide broadcast during that time.

On the island, there will be a brief guided walking tour and then participants will reboard the vessel to watch the “stars” emerge into the sky. There is a 72-step climb from the dock to the start of the tour, and good walking shoes are recommended. The return trip offers still more views of Constellation against the Highlands scenery.

Evening kayak tours, offered at varying times on Friday and Saturday evenings now through the end of September, are offered by the official kayak-tour provider, Storm King Adventure Tours. These two- to three-hour tours, for a maximum of 16 participants, depart from Cornwall-on-Hudson. Accompanying guides will discuss the history of the area and the project as participants paddle around the island and view Constellation. Private mid-week tours are available on request. For information on kayak tours visit stormkingadventuretours.com.

For information about hiking trails, as well as detailed maps for the viewing spots, visit melissamcgillconstellation.com. For the area closest to the installation, look for the NORTH Hudson Highlands trail map.

McGill encourages people to take a look at Constellation more than once, and from, literally, different perspectives: “The work was designed to offer different views from different locations — so you don’t see all stars from any one specific location — encouraging viewers to explore the work from different angles and perspectives. The experience from the east side of the river is different from that of the west side of the river … as is the experience at different times of day. Like the landscape itself.”