In a sense, local justice courts are the “entry level” of the New York State judicial system. There are about 2,200 such courts across the state, and collectively they handle close to 2 million cases a year. Separate courts are convened regularly in the Town of Philipstown, the Village of Cold Spring and the Village of Nelsonville. While they don’t handle felonies, crimes that include such serious offenses as murder or manslaughter, they sometimes conduct arraignments and preliminary hearings in felony matters before those cases go on to a higher court.

Justice Courts do however deal with misdemeanors and violations and a range of offenses serious enough to land a person in jail for up to a year while also facing substantial fines. They also handle traffic violations, civil litigation up to $3,000, landlord-tenant disputes, family offenses — including issuing orders of protection, and small claims actions of up to $3,000. The handling of small claims is unique in that cases generally don’t include the use of attorneys.

Justice Court judges are elected every four years with the vote held in conjunction with federal elections. Steiner, who received his law degree from SUNY Buffalo in 1972, was initially appointed as a judge by the Philipstown Town Board in 2000, filling a vacancy after the incumbent judge moved on to a higher court. He has been re-elected three times since. Asked why he wanted to serve on the Justice Court bench, Steiner told The Paper: “I buy the line that Justice Court are the closest to the people. If you treat people with dignity and respect they’ll have more appreciation and respect for the judicial system.”

He also feels it takes a certain personality to be an effective judge. “You have to have the right kind of temperament — you need restraint, to not go off and lose it with people,” he said. “On the other hand, you have to maintain order in your court room.”

A ‘fool for a client’

With the exception of small claims cases, which are set up for self representation, Steiner goes along with the old adage that someone who represents himself in court “has a fool for a client” — even in Justice Court. “If you are charged with a crime, a misdemeanor, I think you’re foolish to represent yourself without at least speaking to a lawyer,” he said. 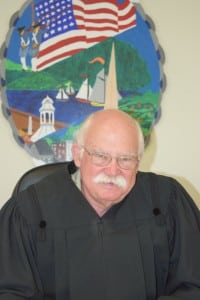 In his 15 years on the bench, Steiner has seen changes in the cases that come before him. On the plus side, he has noticed a decline in the number of DWI charges (driving while intoxicated), but said the DWIs he sees now tend to be more serious in nature. “Often it’s repeat offenders, [having] prior DWAIs,” driving while ability impaired, a lesser charge, he said. Steiner said he has also seen an increase in the number of young, professional women charged with use of heroin. The seven deaths by drug overdose in Putnam County in recent years is evidence of a serious increase in the drug problem, he said. “It used to be cocaine. Now it’s more and more likely to be prescription drugs or heroin.”

Steiner feels that the recent hard economic times have contributed to the problem. “It has had a negative effect on the things people do to get by — and to deal with emotional stress.” That behavior he said can include theft in order to feed a drug habit.

Many are surprised to learn that judges are not required to have a law degree. Steiner said that in New York state that is largely to accommodate small, remote communities further upstate. “A town or village [there] may have only one lawyer — and they can’t be the judge as well.” Steiner said he was aware of two Justice Court judges in the past who were not also lawyers. Overall, though, he thinks it makes sense for judges to have a formal legal background in order to effectively handle trials and serious related legal issues, such as rules governing the suppression of evidence. “You use the law a lot; it’s a lot of responsibility,” he said.

The three local Justice Court are part of the 9th Judicial District, which includes all such courts in Putnam, Dutchess, Westchester, Rockland and Orange counties. Recent court reforms included the appointment of a supervising judge for each district. The Honorable Charles Apotheker serves that role in the 9th District. Part of his duties include hearing any complaints filed against judges in the district. Complaints against judges can also be filed with the state-level Judicial Grievance Committee, which has the power to remove a judge from the bench if necessary.

Statewide, recent discussions regarding the need to streamline local government have often included the potential for consolidating Justice Courts. Steiner thinks that might make sense locally. “I think it’s logical to consider [consolidation],” he said. “It should save taxpayers money.” He pointed to Ossining as an example where, although complete consolidation wasn’t implemented, a certain amount of streamlining took place. “The town and village couldn’t agree on consolidating courts. But they built a new court which is shared, so they save on the facility at least.”

Currently, Philipstown, Cold Spring and Nelsonville each have a courtroom located in their respective municipal offices — three separate courtrooms on the same street, within a very short distance of each other.

When asked whether the fact that fellow Philipstown judge Tomann is a Republican poses a political problem, Steiner, a Democrat, said: “I don’t think so. Judges tend to stay; if they do a good job, they get re-elected,” regardless of political stripe. He also pointed out that locally, Democrats have chosen not to run a candidate against Tomann. He does, however, see merit in a modified system for determining judges, one that is used in some other states. Under “the Missouri Plan,” a nonpartisan commission initially appoints judges for a single term; thereafter however, judges must go to the voters to be re-elected.