Hometown boy is a summertime prince

The Hudson Valley Shakespeare Festival’s casting notice, posted locally, sought a young boy to play the rather grandly named Mamillius, son of King Leones and Queen Hermione, who — without revealing why — serves as a catalyst for much of what ensues in the course of The Winter’s Tale. (Read more coverage of the production.)

Aleksander (Alex) Danilov, 9, and an about-to-be Haldane fifth-grader, was up for the audition, which proved to be “actually pretty fun, because I had a race with Davis. I also caught an imaginary firefly.” That would be Davis McCallum, the show’s director. (Actors wishing to audition next season might want to start running some sprints to prepare.) 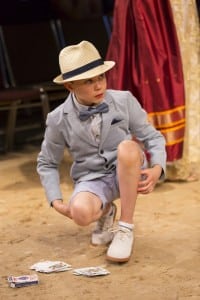 For a kid his age, Alex has had a fair bit of experience, all of it at the Philipstown Depot Theatre. His resume there included Fess in The Baker Street Irregulars, Juror/Vendor in The Trial of Goldilocks and Mikhail the Russian in Fiddler on the Roof.

It all must have gone well, because Alex got the part, which he shares with the similarly named but slightly differently spelled Alexander Louis, of Tarrytown, alternating nights. McCallum calls both kids “terrific, and their wonder and excitement at being a part of a play at HVSF has lifted the morale of all of the adults working on the play. The main challenge with kids onstage and under the tent is audibility. And so, I have a standing bet with both of the Alexes: If they ever succeed in being too loud, I will take them and their folks for pizza at Angelina’s, my treat.”

Asked how a prince from the long-ago time the play is set in is different from a boy growing up in Cold Spring today, Alex had a ready emailed response: “Well, there were no ELECTRONICS!!! They are a key part of growing up in 2015, [email protected]!!!”

Alex said that he’s learned a great deal through the rehearsal process and now performing it repeatedly, multiple times a week over the course of a nearly three-month run: “I have learned that you can have fun, even if you do not know anyone. It is fun to work with new people. The part is always fun, even when there are no rehearsals. From the time that I walk onto the stage with Frankie [Francesca Choy-Kee, who plays his loving mother] to the time I take my final bow of the show, the excitement of being onstage is endless.”

Grilled about letting us in on “What’s silly and fun about being in a show that maybe the audience doesn’t know about?” Alex was willing to disclose that “backstage is amazing. It is always full of interesting things to do, including magnet puzzles. Everyone else is fun to work with, even though they may seem not fun in the play (shout-out to Tom Hammond). Before the show, if you bring your glove you can play catch with Triney, and Babak. (By ‘glove’ I mean a baseball glove.)”

Handily for him, he will be doing just that, double-dipping, back at the Depot, portraying Winthrop Paroo in the upcoming Depot Youth production of The Music Man. That would be the young lad with the lisp, who sings Gary, Indiana. Winthrop may not be a prince, but he is, traditionally, a big ole scene-stealer, something Alex is already doing under the tent at Boscobel.

One thought on “Aleksander (Alex) Danilov in The Winter’s Tale”