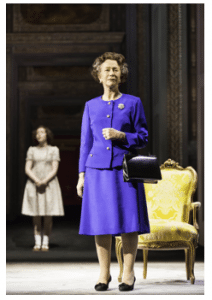 On July 26–28, the Downing Film Center will present four screenings of National Theatre Live’s recording of The Audience, starring Helen Mirren as Queen Elizabeth II. The play, written by Peter Morgan (The Queen) and directed by Tony Award–winner Stephen Daldry (Billy Elliot, The Hours), was filmed live during its original run at the Geilgud Theatre in London’s West End in 2013.

Mirren recently won the best actress Tony for her performance in the Broadway production, and the play has been nominated for and received numerous other awards. The film features an exclusive Q-and-A with Daldry and Mirren.

The play depicts the weekly private audiences between the queen and her prime ministers — from Winston Churchill to Margaret Thatcher to David Cameron.

The Downing Film Center is located at 19 Front St. in Newburgh. For more information, call 845-561-3686 or email [email protected]