Although we Americans (and many Western Europeans) associate pancakes with breakfast — and a sweet breakfast at that, with fruit, syrup and all the trimmings — history and archeology suggest that pancakes may be one of the oldest and most widespread and varied recipes known to man.

This ubiquitous, pan-fried flatbread recipe spans every continent and culture, beginning with the ancient Greeks (tageninas, made with wheat flour, olive oil, honey and curdled milk) and continues into Africa, Meso-America, India and Asia. Composed around a starch-based batter (usually wheat, but corn, buckwheat and other grains or bases — think potatoes — will do), pancakes invariably include additional ingredients, toppings or fillings, and that’s where the fun begins.

The aforementioned sweets are but a start: an endless list—sweet and savory—of meats, seafood, cheeses, vegetables, fruits and nuts (anyone for chocolate chips?) appear in combinations and quantities limited only by personal and cultural tastes — or good sense.

Pancakes are also the “ur” fast-food: the spiritual-culinary ancestor of the French crêpe, the Indian dosa, African injera (or enjera) or the Russian blini. Shapes and sizes vary but the impetus is the same—use what’s available, tasty and quick. Fast, cheap and easy.

It’s not much of a stretch, either, to see the pancake as a precursor to the sandwich — whatever-you-have-on-hand sandwiched (an early noun, verbed!) between two slices of a convenient starch-based enclosure system. (The sandwich takes perhaps its most extreme manifestation in the aptly-named “Something Different” at Brooklyn’s Junior’s Restaurant. Two potato pancakes enclose sliced beef brisket, au jus… with applesauce… doctor’s consent required, presumably.)

Or think pizza — maybe not traditional Italian, but certainly kitchen-sink-American, best exemplified by Wolfgang Puck’s “California-style” which opened up “the slice” to exotic ingredients like, duck, goat cheese or zucchini flowers, and reaching a zenith in the so-called “Jewish pizza” — topped with smoked salmon, crème fraîche, capers, and dill. 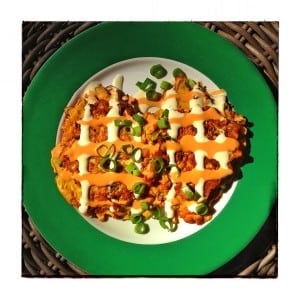 Which brings us to this week’s recipe: Okonomiyaki, ostensibly Japanese street food, and not-so-surprisingly known as “Japanese pizza.” It is literally and figuratively based around the idea of a savory pancake, containing “what you like” or “what you want” (okonomi), grilled or cooked (yaki), and bound by a flour-based egg batter.

Okonomiyaki is common throughout the country, although batters and toppings vary by region and may include any of the following: grated nagaimo (yam), dashi (a seaweed-seafood preparation), green onion, pork belly, beef cheeks, octopus, squid, shrimp, vegetables and ramen or soba (noodles). In addition to the egg batter, the most prevalent ingredient is thinly sliced cabbage.

Okonomiyaki is usually finished off with a sweet-spicy sauce specific to Japan (Otafuku, by brand) and/or Japanese “mayonnaise” (sweeter and more “egg-y;” and again, by brand — Kewpie) and garnished with seaweed flakes or bonito flakes, sesame seeds or pickled ginger.

Hiroshima-style okonomiyaki (Hiroshima-yaki) is a lofty, layered pile of batter, cabbage and other ingredients smashed down as it cooks and topped with noodles, a fried egg and sauce, while Tokyo-style (monjayaki, named after Monja Street, the main thoroughfare) is runnier and more “fluid.” Osaka- (or Kansai-) style is somewhere between a pancake and an omelet in which the ingredients are evenly incorporated into the batter and pan- or griddle-fried on both sides, dressed and served. Again fast, cheap and easy.

The province of numerous mom-and-pop restaurants, versions are as numerous as those eateries, and this “Osaka soul food” is notable for the “anything goes” freedom that proves the versatility of this concoction in this predominant native form.

For this recipe, I substituted lightly cooked and drained chopped bacon for the pork belly and included both shrimp and sautéed shitakes—leftovers from a previous meal—which again points to the “whatever you want” flexibility of this preparation. Okonomiyaki is, if nothing else, a great way to use those tiny bits of tasty things you have laying about which don’t quite add up to a complete meal.

I left out the bonito flakes and dashi in deference to less adventurous palates but suggest giving them a try, at least once, for authenticity’s sake. The sauces are Western approximations of traditional (albeit commercial) Japanese counterparts. (The sauce preparations specified will keep refrigerated up to two weeks and are useful to have on hand for even faster weeknight preparation.)

For the gluten-intolerant, buckwheat, rice flour or potato starch are possible substitutions although proportions may vary. And if you’re prone to Paleo, there’s a version out there for you.

I can easily see swapping out the cabbage for kale, chard or some other seasonal crucifer. Consider sprouts, shredded carrots or potato/sweet potato for additional nutritive value. And there’s no reason not to try chicken. I even encountered a version featuring oysters fried in butter, which, along with a little bacon, starts to sound like a Hangtown Fry (but that’s another story).

As I said, almost anything goes.

For the “red sauce”:

For the “white sauce”:

Prepare sauces: Whisk ingredients together (independently, of course); chill and set aside while you make the pancakes.

Warm two tablespoons oil in skillet over medium-high heat until it glistens. Spoon mixture into the skillet as you would for pancakes; cook at three minutes each side or until uniformly golden. Keep warm, covered, in a low (200 to 225°F) oven as you make the remainder.

* Any of these additional items should be pre-cooked and drained as the six-minute cook time is not enough to ensure proper cooking.