After more than a century, the Catskill Aqueduct will soon get some “R and R” — repairs and rehabilitation — when the New York City Department of Environmental Protection (DEP) proceeds with work on 14 aqueduct stations in Philipstown over the next six years. 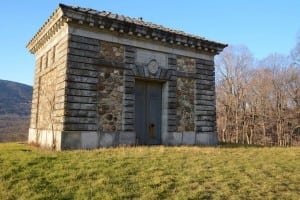 A covered tunnel, the aqueduct carries water from the Catskill Mountains into New York City while supplying other municipalities along the way, including Cold Spring and Nelsonville, in times of urgent need, such as when the Cold Spring reservoirs dip during droughts.

Plans for upgrading the aqueduct, already underway, were presented by DEP representatives to the Philipstown Conservation Board Tuesday, Dec. 8, in one of a series of meetings the agency intends to hold with municipalities along the 74-mile aqueduct, which runs largely underground, including beneath the Hudson River.

DEP staff will begin inspections in early 2016, with major work scheduled for 2017 and expected to last until the middle of 2021. In Philipstown, including Nelsonville, the project involves mechanical repairs, sealing of culvert drains and other drain-related work, bridge improvement and installation of new “boatholes” (access hatches originally designed to allow insertion of a small boat into the aqueduct for inspections). 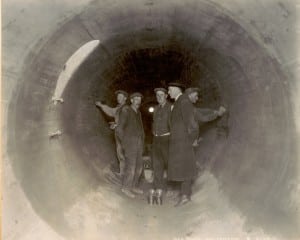 It also involves removal from the aqueduct of “biofilm,” which is slowing down the water flow. Made of mineral build-up and bacteria, the biofilm “looks and acts like mud,” explained Jonathan Hoffman, a DEP engineer and program manager. According to the agency, the aqueduct, built to handle 640 million gallons of water daily, now carries 500 million gallons.

The Catskill Aqueduct upgrades are part of a DEP campaign to ensure “water for the future” and allow the aqueduct to support the New York City water system when leaks and other problems on the Delaware Aqueduct are fixed in 2022.

The expectation is that the Catskill Aqueduct overhaul is to “make sure it lasts another 100 years,” said Emily Pereira, one of three DEP program managers who met with the Conservation Board. It also will increase the aqueduct’s capacity so that more water can pass through while the Delaware Aqueduct undergoes repair.

Catskill Aqueduct project areas in Philipstown include sites along Indian Brook and Sprout Brook. Those in Nelsonville include the siphon chamber near Foundry Brook, off Healy Road, just north of the village. 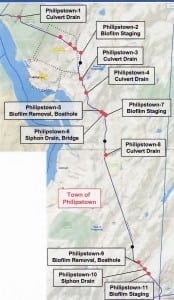 A DEP map shows 11 Philipstown sites, not including three in Nelsonville, awaiting  activity in the Catskill Aqueduct upgrading.  (Click to enlarge)

These locations add such components as sensitive dirt roads and watersheds to the mix of challenges, as Conservation Board members observed in Tuesday’s session, raising questions about possible effects of temporary chlorination of aqueduct water farther north as part of the project and whether the biofilm contains anything poisonous or otherwise hazardous.

The seeping of chlorinated water into the ground or streams in Philipstown should not be a problem, Hoffman said, because after initial surveys, “there’s no reason to believe anything is leaking in the area.” Likewise, he assured the board, “we don’t anticipate using any chemicals at all” in removal of the biofilm, which “is not toxic.”

Asked whether other, non-bacteria creatures — something short of an alligator — might dwell inside the aqueduct, Hoffman recalled finding newt-like amphibians or lizards and said “occasionally you’ll see little fish,” but nothing noteworthy. However, DEP personnel are likely to find tree roots in or around the aqueduct, he predicted.

The DEP expects to finish a draft Environmental Impact Statement in January or February and a final version next summer.