Realtors in the four-county lower Hudson region served by the Hudson Gateway Association of Realtors reported 3,391 residential sales during the first three months of 2016, an increase of 18.5 percent over the same period in 2015, but prices were relatively flat. 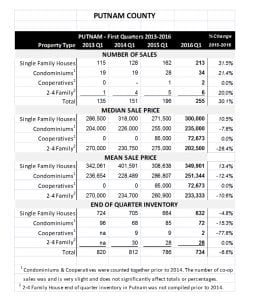 There were about 9,700 properties listed in the four counties, about the same as last year, although the stock in Putnam County dropped 6.6 percent. Putnam County had 255 sales, a 30 percent gain over last year, and the median sale prices rose 10.5 percent, to $300,000, although the relatively small number of sales can cause large percentage increases. The median sale price of a single family home in Westchester, by contrast, was $569,950, down from $600,000 last year. 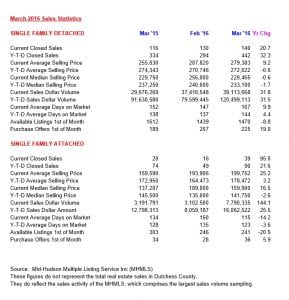 In Dutchess County, there were 442 sales of single-family homes that closed in the first quarter of 2016, an increase of 32 percent over the same period last year. The median selling price of $233,100 was down about 2 percent. Average days on market increased about 4 percent, to 144 days, and the number of listings dropped about 9 percent, to 1,470. The median selling price of condos, meanwhile, was $159,900, about 17 percent higher than in the first quarter of 2015.

The figures are based only on homes listed in the Mid-Hudson Multiple Listing Service and do not include private sales.