The Cold Spring Fire Company (CSFC) will open its doors to the public on Saturday, April 23, from 10 a.m. to 3 p.m. as part of Recruit NY, a statewide effort to increase membership in volunteer fire departments.

“We want to make people aware of who we are and what’s involved with being a firefighter,” said Chief Steve Smith, who has been a firefighter for 24 years. He said the department is hoping to recruit younger members, something that happened almost by default in Cold Spring in the past as family members joined generation after generation. That is less common now. With more people working away from the village, and many commuting into the city, recruitment becomes more of a challenge.

A job for everyone

It takes a commitment to be a firefighter, Smith said, but “it doesn’t matter what your career is — we can train you. We can help you to help your neighbors out.” The Cold Spring fire company’s members have included male and female teachers, military personnel, police, full-time firefighters, landscapers, electricians, self-employed business people and high school and college students, he said. Current members range in age from 16 to 75.

Three young CSFC firefighters epitomize the people Smith hopes will drop by the firehouse on Saturday. 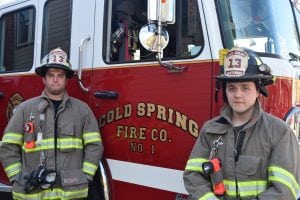 Michael Etta’s involvement in the fire company is part of a family tradition. His father, grandfather, great-grandfather and great-great grandfather also served as CSFC firefighters, he said. The 22-year-old joined in 2011 and is now a first lieutenant and qualified both as a driver and interior firefighter. His reason for joining was simple, he said. “It’s always good to help people.”

In contrast, John Parr, 18, who joined in 2014, was the first in his family to become a volunteer firefighter. He has one more course to become qualified to go into burning structures. He joined CSFC at the urging of a friend, Stephen Junjulas, also a firefighter. “I enjoy every moment I’m at the firehouse … and being there when it counts,” he said, especially when being there includes a call to a fire. “And I like the guys here. It’s like one big family.” Parr said he also values the CPR, first aid and opiate-antidote training he’s received. 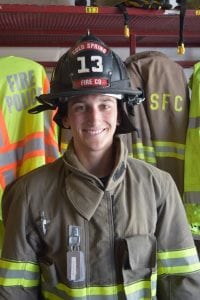 Jeff Phillips, 20, is a second lieutenant whose father and grandfather also served with the fire company. “It’s just something I’ve always wanted to do,” he said. “And I wanted to give something back to the community.”  Phillips said he appreciates that he still has much to learn. “You learn something new on every call,” he said.

CSFC’s Junior Fire Academy, held each summer, has been an effective recruiting tool. Established in 2002, the weeklong day camp teaches students ages eight to 13 the basics of fire safety and firefighting. Smith estimates that about 30 of the academy’s graduates have gone on to join local fire companies, including Etta, Phillips and Parr.

In addition to enjoying a hot dog or hamburger, Saturday’s open house will give prospective members and the community a chance to have a firsthand look at CSFC’s equipment and facilities, including a new 21-foot rescue boat. 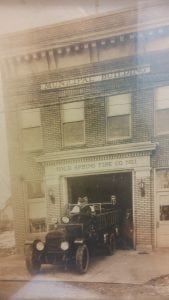 Cold Spring Village Hall at 85 Main St. served as the firehouse from 1926 until 1974 (photo courtesy CSFC)

In 1923 CSFC moved into the newly constructed municipal building which today serves as village hall. The company moved to its current location at 154 Main St. in 1974, taking over the former Post’s Garage.