Students step up for others

Max Hadden’s family loves to travel. Though only in the ninth grade, Max has seen the Galapagos Islands, Botswana and Japan, where his mother, Jackie Huddleston Hadden, once lived. “If it’s on a map, we want to go there,” she said.

The next adventure for the Cold Spring family, planned for this summer, will be a journey to the island nation of Madagascar. As it was being planned, Max, who attends Poughkeepsie Day School, received an class assignment to research “an oppressive situation” in a foreign country and detail what might be done to change it.

What had been “just a trip” to Madagascar turned for Max into an opportunity. “Madagascar is one of the 10 poorest countries in the world, and 90 percent of the population lives on less than $2 a day,” he explained. “There’s a lot of child labor, and many children are forced to work in jobs like mining.” 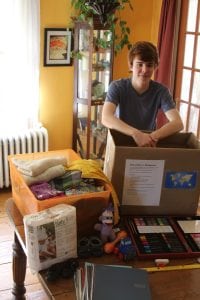 Max has launched a clothing and school-supplies drive to benefit children in Madagascar, placing drop-off boxes at the Desmond-Fish Library in Garrison and the Butterfield Library in Cold Spring and at the Garrison offices of pediatrician Peter Gergely. He is asking for donations of new or quality used clothing for infants and children up to age 4, especially girls’ clothing, as well as notebooks, paper, pens, pencil sharpeners, rulers, erasers, scissors, glue and picture books.

The boxes will be in place until May 6. The Philipstown Boy Scout Troop 437 has collected donations for Max and the North Highlands Fire Department Ladies’ Auxiliary donated cash for one of its members to purchase supplies. (For more information, email [email protected])

Max says he plan to pack everything in large duffel bags for the family to bring with them. The company that organized the family trip has provided the name of an orphanage in the capital city of Antananarivo, and the family also hopes to distribute the donations to other, more remote, locales along their route. “Learning this kind of stuff shows you how lucky you are,” Max says. His mother adds: “It’s now not just facts for a school paper; it has turned into something else entirely … Ideally you want service to become a habit: to grow up and do service when nobody tells you to.”

More than half of Haldane High School’s senior class traveled to New Orleans earlier this month for the third trip of what has become an annual excursion to rebuild homes lost in Hurricane Katrina nearly 11 years ago. 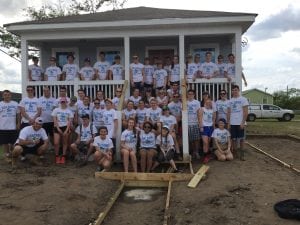 The seniors spent the first two days of their four-day visit on interior framing, painting, siding, window installation, carpentry, cementing and landscaping under the guidance of Habitat for Humanity, then spent time as tourists in the French quarter and on swamp boats. As in the past, the students organized fundraisers throughout the school year to help finance the trip.

“It was incredible to be in an environment where most of us had no idea what we were doing, and watching us all struggle and learn together outside of our usual horizons,” said Tobey Kane-Seitz. “The experience left me with a new skillset, and a great sense of pride for our small school.” 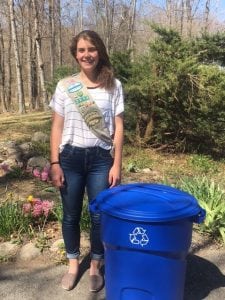 Tobey Kane-Seitz with one of the recycling bins she will donate to Newburgh residents. (Photo by Marie Kane-Seitz)

Kane-Seitz is also involved in another service project, this one much closer to home, in Newburgh. To earn her Gold Award, the highest honor given to a Girl Scout, she created an online registry that allows people to donate blue recycling bins and lids to residents of Newburgh. Contributions can be made through myregistry.com. 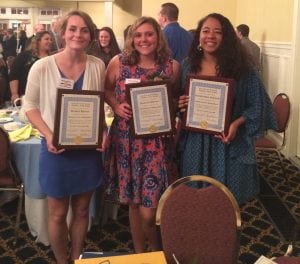 Martin, as the student liaison for the board of directors of the Little Stony Point Citizen’s Association, organized student volunteers to help at events and clean ups. She also developed a plan for a concession stand at the park and worked with the association to create a business sponsorship program.

DiPalo, for her service project to earn a Gold Award as a Girl Scout, organized a shoe drive in which she collected 600 pairs of shoes to benefit, among other groups, the Walter Hoving Home in Garrison.

Gariepy, the senior class president, helped organize a student-run 5K race to benefit autism research; stage managed many of the drama department productions, twice co-ran the Fashion as Art event and organized the student-faculty basketball game and many fundraisers for the class trip to New Orleans. “Not only was there a job for everyone to do, there was a collective sense of purpose,” she said. “We were not just building a house, we were restoring a family’s dignity.”