Food writer and chef Michael Ruhlman is a very careful man, especially when it comes to the formal traditions and processes of cooking. He’s not quite the chemist-geek Harold McGee can be, but both authorities agree on one thing: the pure and simple magic and majesty that is this thing we call vinaigrette.

In McGee’s science-based outlook, vinaigrette is a “water-in-oil emulsion” (as opposed to mayonnaise, an “oil-in-water emulsion”), and an unstable one at that (meaning that the components can’t mix evenly and will eventually separate into their original forms).

The classic sauce vinaigrette is composed of an aqueous (water-based) acid (vinegar or citrus juice) and a culinary oil [usually olive, but canola and nut oils (walnut, almond, hazelnut) or seed oils (pumpkin seed and others) also have a place here].

The generally accepted proportion, according to Ruhlman’s Ratio: The Simple Codes Behind the Craft of Everyday Cooking, is 3 parts oil to 1 part “aqueous acid.” (That aqueous acid — particularly the vinegar family — is also large and hoary and worth exploring.) In classical French cuisine, salt and pepper are the only necessary additions, although various spices, herbs, onions, mustard or sweeteners (sugar or honey) are common modern elaborations.

Generally thought of and relegated to use as a salad dressing or a cold sauce (to accompany cold artichokes, asparagus, or leeks), Ruhlman, in his excellent cookbook/treatise, Twenty, plays agent provocateur by cheekily naming vinaigrette, “The Fifth Mother.”

A little history is required: The French cuisine classique taxonomy of sauces divides them into distinct “matriarchal” categories—Sauces Espagnole, Béchamel, Velouté and either Allemande or Tomate (depending on whether you side with Chef Marie-Antoine Carême or the august Chef Escoffier). These hot and heavy “mothers’ sauces” are responsible for countless overweight offspring (daughters) resulting from augmentation with additional ingredients. (Examples: Sauce Espagnole + mustard = Sauce Robert; Sauce Béchamel + cheese = Sauce Mornay.) 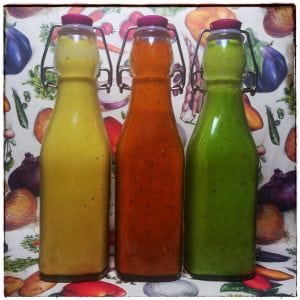 There is precedent for Ruhlman’s bid: a cold Sauce Ravigoté is your basic vinaigrette “reinvigorated” or “freshened up” with shallots and capers. It is a common dressing for chilled poached fish, poultry, eggs and other, shall we say, idiosyncratic French viandes — tête de veau, jellied hare, head cheese or calves’ brains — and a decidedly lighter and brighter finishing sauce than those other mothers.

By now you’re probably saying, “Why should I care?” Here’s why: It’s Memorial Day weekend and grilling season is on.

A vinaigrette is if nothing quick and easy — you probably have the basic ingredients in your pantry now. With very little equipment or practice (and NO heat) the most insecure kitchen klutz can whip one up in less than five minutes. With some very minor adjustments and additions you’ve got in your repertoire one of the most useful sauces imaginable, capable of giving everything from grilled vegetables, meats and seafood to steamed vegetables or raw greens a finishing blast of intense, fresh flavor. (Keep in mind that any vinaigrette will also make an excellent marinade for foods before grilling or roasting.)

The three sauces given here are merely a beginning. I’ve prepared them in a blender as it delivers a fully emulsified sauce, but you could just as easily whisk them by hand or even shake the ingredients together in a jar. Also, as noted, they will keep refrigerated for two weeks or so and are great to have on hand to dress up any cold leftovers. Should the sauce separate, a healthy shake should re-emulsify it.

Just now I prepared had a satisfactory salad of some baby arugula, cold lentils and avocado, with a healthy splash of the smoked paprika vinaigrette. I also suggest it on grilled shrimp, chicken or cannellini beans. The green onion-tarragon sauce pairs well with poached or grilled salmon or grilled asparagus; the lemon brightens up grilled chicken or fennel.

Just use your imagination and let taste guide you. A good mother will never let you down.

For all three recipes:

Puree basic ingredients in a blender. With the motor running, slowly drizzle in the olive oil until emulsified. Add salt and pepper to taste and pulse a couple more times to incorporate. Yields 1 cup and will keep up to two weeks covered and refrigerated. Use as finishing sauce (or marinade) for grilled or poached seafood, grilled or roasted meats and vegetables or as a dressing for cold, composed salads.