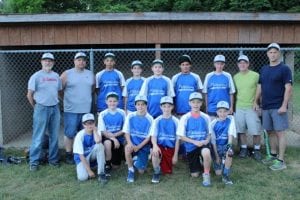 The 10U team plays until a state champion is declared, while the 12U team has the chance to advance all the way to the Little League World Series in Williamsport, Penn., in August.

Last year, the Philipstown 10U team won its first two tournament games but then lost the next three to miss advancing to the next round. The 12U team lost their five games but all by less than two runs. This year’s 12U team is an older group, with eight players who are 12 (compared to two last year).

The first game for the 10U team will be at 6 p.m. on Friday, June 24, at North Highlands Field when its hosts LaGrange. On Wednesday, June 29, the 10U team plays again at home. The first 12U home game will be Thursday, June 30. Refreshments from Greg’s Good Eats Food Truck will be for sale at all games.