After a major hull restoration over the winter, the Clearwater was scheduled to embark on July 4 on its 47th sailing season with a relaunch ceremony at Waryas Park in Poughkeepsie, but for now the event has been postponed.

“The sloop is back in the water and safely afloat with the midships section of the hull completely restored,” said Dave Conover, interim executive director at Clearwater. “While the sloop is in great shape, it has taken us longer than expected to go through our project checklist, which must be completed before we can schedule a required inspection with the U.S. Coast Guard. As a result, we’ve had to temporarily delay our sailing season until we take care of these important details.” 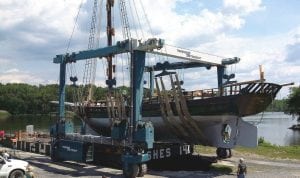 The Clearwater being moved to the river at Albany (photo provided)

A public sail from Beacon is scheduled from Beacon for July 31. Melissa McGill is scheduled to lead tours of her Constellation installment at Bannerman Island on July 9 and Aug. 27, and the ship will provide sails during the Beacon Sloop Club Corn Festival on Aug. 14. Tickets, which are $50 for adults and $15 for children, can be purchased at clearwater.org.

On June 16 the ship was carried by barge from Kingston to Albany, where it was lowered into the river. It remained in the water for about a week, cradled by straps, to allow its new oak planks to swell. The ship then returned to Kingston under its own power, where the crew will up-rig the lines and sails, as well as reinstall the galley, Captain’s cabin, and the hold, including the head.