Plus, another hearing coming on linkage zone

A year ago, one of the most talked-about issues during the Beacon City Council race was the possible consolidation of the city’s three fire stations.

Because the existing stations are housed in aging buildings — two of them are more than 100 years old — the city has long considered building a new, central fire station and consolidating its operations into one site. After the election last November, however, the issue fell to the back burner as zoning and housing debates have taken center stage at council sessions.

City Administrator Anthony Ruggiero said on Aug. 31 that he expects the council to revisit the firehouse discussion in October. While a number of studies conducted over the last decade have supported consolidation, Ruggiero said the council could also decide to maintain the existing stations: the Lewis Tompkins Hose station on South Avenue, the Beacon Engine station on East Main and the Mase Hook and Ladder station at the Main Street headquarters.

However, the three buildings aren’t as conducive to modern firefighting needs, he said. Newer buildings, for instance, are more horizontal than vertical. Two of the three Beacon buildings are several stories high. 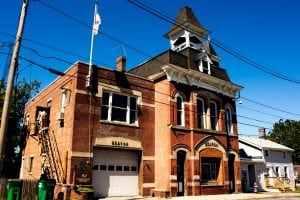 The system is operational, Ruggiero said, but “the fire program has changed. Some of the older [fire]houses were built for horse and buggy.”

The most recent study commissioned by the city — in 2014 by TriData Division of Arlington, Va. — recommended building a 21,200-square-foot station at the city-owned Cannon Practice Field at the corner of Verplanck Ave. and Matteawan St at an estimated cost (at the time) of $7.25 million. TriData suggested the Cannon Field site would afford the fire department four-minute coverage to all of the areas of highest population density with only slightly extended travel times to the very south of Beacon.

In 2015 the Beacon Fire Department responded to 1,607 emergency, medical and fire-related calls in an average of three minutes, the quickest response time of any department in Dutchess County.

Beacon planners are now working to create an entirely new zoning classification as the city tries to determine how much development to allow in its linkage zone.

The linkage debate began in February when a group of residents petitioned the city to rezone seven parcels within the zone, which was created three years ago to encourage increased residential development in the area between the west end of Main Street and the Hudson River. The petitioners argued that high-density linkage zoning would disrupt the neighborhoods surrounding the seven parcels, two of which are on South Avenue, with five others on Wolcott Avenue/Route 9D.

A hearing — which will be the fourth on the issue — had been scheduled for Sept. 19 but is expected to be postponed to introduce the new zoning proposal for Parcel L, the 2.8-acre site on Route 9D that combines three lots and has been a sticking point in the discussion.

Parcel L is owned by Beacon Ridge Associates and a builder, Unicorn Contracting, has proposed a 70-unit development called River Highlands for the site. The city’s most recent proposal called for the site to be rezoned to a “medium density” of five to nine units per acre — a reduction from its present status but not the low density of one to two units per acre requested by residents.

The zone to be created, discussed on Aug. 29 during a council work session, appears to be a compromise, likely allowing around 16 units on the site.

City Administrator Anthony Ruggiero said on Aug. 31 that it’s not unheard of for a city to create a new zone as it grows. He cited the linkage zone itself, which did not exist prior to 2013.

“It doesn’t happen every day, but it’s not that unusual,” he said. “Times change and municipalities change. That’s why state law says you should look at your comprehensive plan every 10 years, so you can review how you want your municipality to be developed.”