Haldane and Beacon fine-tune for spring

The indoor track season is often used by high school athletes to fine-tune for the outdoor season in the spring, and the Haldane and Beacon programs have raced out of the gates.

The Haldane team includes 19 athletes from Haldane and 11 from Putnam Valley High School. Coach AJ McConville says he is optimistic about the group and expects to be competitive at the league, Northern County and Class C state championships. 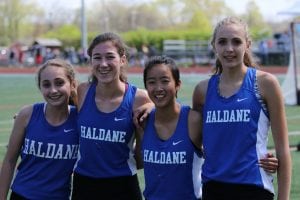 “We will have a couple individual and relay champions at these meets,” McConville predicted. “Both the boys’ and girls’ teams could finish in the top three in the league and the top three or four at the Class C championships.”

The Beacon track program has 55 athletes, with both the boys’ and girls’ teams poised for league titles, which would be five in a row for the boys. The girls have not won the league since 2012, but an influx of soccer talent has strengthened the team in the mid-distance and distance events.

Beacon has been fueled by standout performances that included senior Alex Laird finishing second in one meet in the 55-meter sprint at 6.99 seconds, the sixth- fastest time in school history and junior Xavier Collins posting 7.30, the 10th- fastest mark.

The team captain, senior Richard Kish, is one of the best competitors in Class C in the triple and long jumps and his versatility in other events makes him invaluable. “I would not hesitate to use him at anything from a 4 x 400 meter relay to a two-mile run,” Henry said.

Ethan Burgos, a junior, has been strong on the 55-meter hurdles, as well, finishing fourth in a recent meet at 8.67 seconds, second-best in school history.  Burgos is also a part of the 4 x 200 relay that has posted a time of 1:39:31.

That relay team includes Laird, junior Vincent Compagnone and a promising freshman, Kaleb Istvan, who finished second in the 600-meter finals at the Section 1 freshman/sophomore meet with a time of 1:35. Sophomore Jayen Lare’s 4:47.87 in the mile was second-best in school history.

The Beacon girls’ track team is also loaded with talent. Sophomore Anna Manente has pole vaulted seven feet, second- best in school history. Sophomore Eliza Erickson set a school record in the mile. Victoria Banks, also a sophomore, has had strong showings in the 1000 and 600 meters with the third-best school times in both events. Jummie Akinwunmi, a junior, won the high jump at the Section 1 Kickoff meet with a 5’0” leap. She and her sister, Ennie Akinwunmi, a sophomore, are poised to rewrite the Beacon books.