Plans to connect the Cold Spring water system to New York City’s Catskill Aqueduct during repairs to a village dam have left Philipstown with a dilemma.

For the deal to go through, the town must create a separate water district to cover about a dozen homes located in Philipstown just outside the village, or see those property owners charged substantially higher rates.

Philipstown opposes both options. So does Cold Spring.

How to Create a Water District

According to state law, a town must:

Obtain a report and plan from a professional engineer.

Resolve who owns the pipes.

Philipstown Supervisor Richard Shea calls the requirement to create a water district for 12 properties “absurd. We’re not doing it,” he said at a Town Board meeting on May 4. “It is going to cost thousands and thousands of dollars to set up and administer.” Neither does the town want 12 property owners to receive sky-high water bills, he said. “This is just heavy-handed nonsense for no benefit. So we’re going to fight it.”

On May 17 Shea said he had contacted Sandy Galef, the state Assembly member who represents Philipstown, for assistance. “This runs completely counter to all the consolidation efforts that Gov. Andrew Cuomo has put forth and which towns and counties are scrambling to institute,” he said.

Dating from 1895, Cold Spring’s water system serves the village as well as most of Nelsonville and some residences just outside the village. Two Cold Spring dams on reservoirs off Foundry Pond Road belonged to the West Point Foundry and may date to the 1820s. 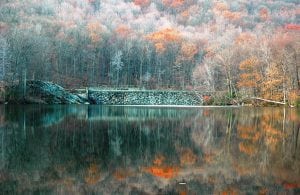 Since 2010, when an engineering analysis found the upper dam “unsound” but stable, village officials have anticipated repairs. Making them requires lowering the reservoir level. To ensure that sufficient water reaches local taps during the upgrade, Cold Spring proposed tapping into the Catskill Aqueduct, as it did during a 2010 drought. However, this time around, the village wants to use a 16-inch connection, not the 2-inch connection previously used. And that alteration requires a new agreement, said Adam Bosch, public affairs director of the DEP Bureau of Water Supply.

In February the DEP sent the village a 27-page draft contract. Separately, the DEP raised the issue of the 12 homes.

The DEP also said Nelsonville should endorse Cold Spring’s arrangement for using the aqueduct, or its homes might also be charged higher charges. The Nelsonville Village Board approved Cold Spring’s plan on May 15. 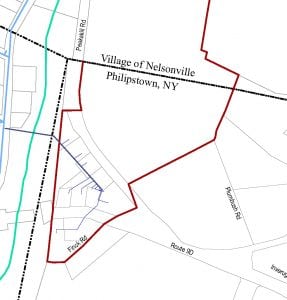 Detail from the Cold Spring water system map shows the area where 12 homes lie outside both Cold Spring and Nelsonville.

Bosch said New York City code only allows the city to sell its drinking water at a discount to municipalities and water districts. If Philipstown chooses not to form a district, the city can still sell the water but the rate is three times higher. He said the issue had not come up during Cold Spring’s prior hook-ups to the aqueduct because “we were previously unaware that a handful of homes in Philipstown were being provided water by Cold Spring.”

Merandy told Shea in an April 20 letter that the village water system, since its inception, has supplied water to those outside village limits, which is allowed under state law. He called the demand for a water district “an unexpected and costly burden on the town” and the homeowners but added that a new district might “facilitate repair and maintenance associated with the water mains serving the Peekskill Road area.”