A bad spill on her last jump in the 100-meter hurdles — the first time she had ever fallen in competition — stymied Abbey Stowell’s pursuit of a state high school pentathlon title for Haldane on June 9. She recovered, jumping up to finish in 18.09 (she had set a school record earlier in the year at 15.85) but fell behind the leaders. 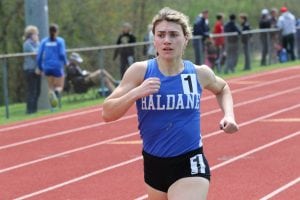 Abbey Stowell competes in the 800-meter run at Somers High School on May 6. (Photo by Michael Haines)

Over two days, each participant competes in the high jump, long jump, shot put, 100-meter hurdles and 800-meter run. Stowell, a junior, finished sixth in Division II and 21st overall. “The top performer in the division was a senior, so I am gunning for the top spot next season,” she said.

Stowell qualified for states by easily winning the sectional qualifier on June 1 and 2 with 3,058 points, another school record.

Among other Highlands athletes competing at the state tournament, which took place in Endicott, Beacon’s Jummie Akinwunmi tied for fifth in the high jump and the O’Neill High School 4×800-meter relay team that included Garrison residents Kailyn August and Anna Northup finished 22nd.

The New York State Track and Field Championships took place in Endicott, New York last weekend. Although she fell short of a title at the state championships, Stowell racked up many other awards this season for the Blue Devils. She earned All-Northern County First Team Honors in pentathlon and shot put and third team honors in the 100-meter hurdles, long jump, high jump and as part of the 4×400 relay team with Ashley Haines, Heather Winne and Lili Westerhuis.

“Every single meet this season, I kept improving my pentathlon score,” Stowell said. “Breaking 3,000 was a huge goal for the season. Going into the states, I was hoping to finish first or second in the division.”

“It was a freak thing,” she said of her fall. After the race, “my leg was scraped, my face hurt, I had whiplash. The trainer was concerned about me having a concussion. There was only a 30-minute window before the high jump competition, so by the time I got cleared I had to go right over to compete in high jump.

“I was trying to forget the fall but since it happened right before, I couldn’t get into the right mindset and I didn’t perform well,” she said. “I couldn’t clear my high mark.”

The shot put was the last event for the day. Stowell said she was able to get some rest and proceeded to have her best shot of the season at 33-9.5.

On Saturday morning, the long jump was her first event. Although she had broken the Haldane record twice during the season, most recently with a 16-9.75 jump, she fouled on her first two jumps and her third was the shortest of the season, at 15-4. “I woke up with neck pain but felt fine in warmups,” she said. “I just wasn’t 100 percent.

“It was mostly disappointing,” she said of her finish, “but I’ll come back next year prepared.”