Although billed as “neighborhood office hours” — generally an hour-long session designed for constituents to meet with Sean Patrick Maloney and his staff for help with bureaucratic red tape — the U.S. House member and Philipstown resident spent nearly two hours at Haldane school auditorium in Cold Spring on July 23 answering policy questions and at times engaging in spirited debate. 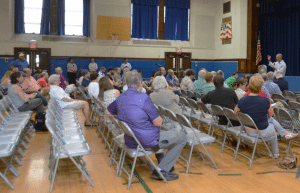 About 70 people turned up at Haldane (Photo by L.S. Armstrong)

The forum, which drew about 70 people, occurred two days before the U.S. Senate began voting on legislation to repeal the Affordable Care Act, or “Obamacare,” the national health insurance program. Acknowledging that the ACA needs improvements, Maloney recommended that “we win this fight now” to save it before fixing it.

If the ACA disappears, he said, “55,000 people in the Hudson Valley will lose their healthcare right off the bat,” while funding for opioid addiction treatment and nursing home services would stop. But, he added, “people are really waking up” to what a repeal means.

One Republican measure, sponsored by Rep. John Faso, who represents the 19th District, would force New York State, instead of its counties, to pay many Medicaid costs. (Under the ACA, state-level Medicaid expansions provide healthcare to many people previously lacking it.)

Faso’s proposal has prompted worries about how the state could cover Medicaid costs without vastly increasing taxes. Maloney said the federal government should “give back $2 billion of the $30 billion you send to Washington,” much of which subsidizes services in other states such as Kentucky, home to Senate Majority Leader Mitch McConnell.

Ultimately, as the Republicans attack the ACA, “the result may be the single-payer” plan, with the federal government creating a program akin to Medicare (which only serves those age 65 and older), Maloney said. “They’re fueling Medicare for all.”

Opponents of a natural-gas plant in Orange County strenuously criticized Maloney for not trying to shut it down.

He argued that it’s been under development for years and that the effort should be to ensure it operates safely, not to prevent it from opening.

“I’m living in a world where I think this is going to be part of the energy grid in the Hudson Valley and I want to make it safe,” he said.

He also backed so-called “carbon taxes” to discourage use of fossil fuels as the nation adapts to non-polluting energy sources. “This is a bipartisan opportunity here” to make progress, he said. Nonetheless, he stressed the burden of change must be equitably shared, not borne unfairly by working- and middle-class taxpayers.

“I want to get there,” he said. “But I want to bring the country with us. Otherwise, we’re just talking to ourselves.” 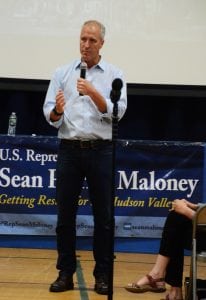 “It’s a terrible idea,” Maloney responded, noting that Trump’s plans do not automatically become federal policy; Congress must agree. “I understand the concerns about balancing the budget” but international aid comprises only a small fraction of the expenditures, he said.

Philipstown residents Roger and Cali Gorevic and Nelsonville resident Frances O’Neill asked for Maloney’s help in opposing the construction of two cell phone towers, one on Vineyard Road near the intersection of Routes 9 and 301 and close to the Gorevic home, and the second on a site bordering the Cold Spring Cemetery in Nelsonville.

Cali Gorevic said that the Federal Communications Commission can preempt local authority over cell tower installation, which “is just so wrong.”

O’Neill, the wife of Nelsonville mayor Bill O’Neill and, coincidentally, Maloney’s neighbor, noted that the Nelsonville tower would be near their driveways.

Maloney admitted unfamiliarity with either proposal but promised to look into them. “I don’t get this at every town hall meeting — issues that affect my driveway,” he said. Moreover, he said, “I already have good service,” with existing towers.

Audience members asked about allegations of Russian tampering in the 2016 presidential election; Trump’s establishment of a national commission to investigate voter fraud; and gerrymandering, or configuring electoral districts to favor one party.

Maloney said Americans must “stop gerrymandering” and “have competitive elections.” Of 435 House districts, only 40, including Maloney’s 18th, which includes Philipstown and Beacon, offer consistently competitive races; the others allow either an entrenched Republican or die-hard Democrat to win easily and repeatedly.

On Tuesday, Aug. 1, Maloney will be at the Newburgh Armory Unity Center, 321 S. William St., from 6 to 7:30 p.m. Staff members will be available to assist with problems constituents may be having with federal agencies such as the Social Security Administration, Centers for Medicare and Medicaid Services and the Veterans Administration.

“It’s hard for me to fight for my [political] life every two years, but it’s good for you” that a choice exists, he said. Gerrymandering “is not a partisan,” Democrat-versus-Republican issue, he said. “It’s really a scourge on our country.”

When Margaret Yonco-Haines, a Philipstown Democratic activist, criticized what she called voter-suppression efforts that “do the Russians’ work for them,” Maloney criticized both forms of interference.

He called Trump’s commission to investigate voter fraud a “sham” and expressed pride in New York for refusing to participate. “There’s not voting fraud in any meaningful way,” he said. “Never has been.”

Likewise, “the Russian government should not be monkeying around in our elections,” Maloney said. He warned of potential cyberattacks not just on elections but on dams, the electrical grid and other infrastructure. Five thousand hackers in a Moscow suburb are more menacing than a sophisticated warplane, he asserted. But he noted with satisfaction that Congress is digging deeper into the Russian role (confirmed by U.S. intelligence agencies) in the 2016 race.

Asked if Trump could pardon himself for illegal activity, Maloney responded, “I can’t imagine” he could. “There has to be some limit on the presidential pardon power,” he said. “You’re going to hear a loud explosion on Capitol Hill if he tries to do that.”

An audience member wanted Maloney’s recommendation on the “No. 1” task for citizens concerned about the current political climate.

“Don’t lose faith,” Maloney replied. “Nothing that has happened in the last six months is greater than the U.S. Constitution.” Beyond that, he said, “we can all start talking to people who don’t really agree with us.” Social media goad Americans into only reading, watching, listening to or contacting those with the same views, he said, which breeds insularity and narrow-mindedness. “It’s really pernicious,” he said.