But with seven seniors, all eyes on state tournament

After a win at Croton on Sept. 20, the Haldane girls’ volleyball team stands at 5-3 in its second season after moving up from Class D to C. The program had dominated at the smaller Class D level, winning 13 consecutive regional titles, but it lost in the Section 1, Class C final last year to undefeated Pawling.

The Blue Devils play at Class A Beacon tonight (Sept. 22). Their next home game is Monday, (Sept. 25), against Class A Yorktown. 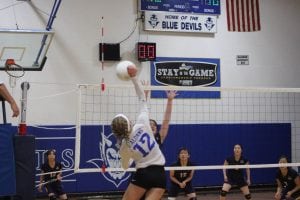 Seven of the 12 players on the 2017 roster are seniors, and they have one goal in mind, says second-year head coach Kelsey Flaherty: a state championship.

(An immediate goal for the Blue Devils will be to play on Sunday, Nov. 5. For the first time this year in Section 1, the regional finals for all four classes will be held on the same day at Pace University. In past seasons they have taken place at two locations on separate days.)

Coach Flaherty, a 2012 Haldane grad, was a five-year starter for the Blue Devils, who won the state Class D championship during her senior year. She then excelled at Division II Saint Michael’s College in Colchester, Vermont, where she had more than 500 career kills. 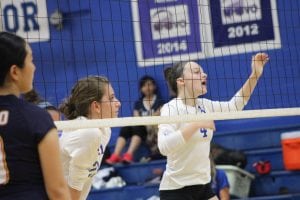 “For as long as I can remember Haldane has always had an amazing volleyball program, and that still stands true today,” Flaherty says. “This season I see a new light in my team. We are motivated in every practice and, of course, at every game.”

Volleyball participation continues to grow nationally and has eclipsed basketball as the second most popular sport for female high school students, behind outdoor track and field.

Flaherty credits club volleyball for the sport’s growing strength; she was a member of the Downstate Juniors Volleyball Club in Peekskill for seven years. “I always encourage the girls to stay involved with volleyball during the off season,” she says. “It makes all the difference.”

Flaherty: Some players to watch 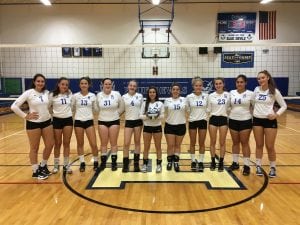