The first “bad” tomato was an indicator that things were headed south. After over two months of summer lunch sandwiches, one mealy bite of a less-than-optimal specimen signaled that it was time to reconsider the menu.

Summer spoils us with its bounty. It’s not that we get lazy in the kitchen, but when things are at their absolute freshest, “cooking” takes on a new meaning and doesn’t require as much effort or planning.

But during this time of the year, when the air temperature says summer but the garden is winding down, we long for the lighter and brighter tastes. Best then to look to the cuisines of warmer climes for inspiration.

The northwest Galician coast of Spain is rugged and not a particularly popular destination. The region is also not particularly wealthy, but its culture is rich in history and cuisine, which leans heavily on readily available seafood.

The potato is also a major crop in Galicia. And peppers — in particular the tiny, bright green Pimiento de Padrón — are considered a delicacy as a tapa, fried in olive oil and sprinkled with salt, not unlike Japanese shishitos. 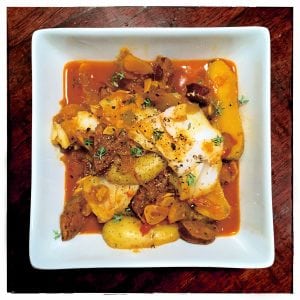 The defining sauce of the region is ajada, a spicy but not fiery condiment made from garlic lightly fried in olive oil and assertively seasoned with sweet paprika. It is used as a condiment for vegetables (cauliflower, cabbage, beans or lentils), but more commonly as the basis for rich stews of potatoes and seafood.

Merluga a la Gallega is the quintessential Galician seafood dish, containing all these distinctive elements. Hake (merluga) is a large, flaky white fish related to cod or haddock that the Spanish are fond of, and while it is available here, I’ve adapted the recipe to the relatively more available and economical cod, although haddock, halibut or even monkfish would be fine. Shrimp, clams or scallops would make for an equally enjoyable meal.

This stew gets its savory punch from a healthy amount of sliced onions fried with the garlic and pimento. Bay leaves add additional complexity, and the quick stovetop cooking serves merely to bind the flavors and cook the potatoes. The seafood is briefly steamed atop the stew for a light, fresh-but-substantial dish perfectly suited to this in-between season.

The Pimientos de Padrón may be difficult to find; shishitos are the best substitute, but fresh Anaheim or poblano peppers (or jalapeños, particularly if milder) are also reasonable.

I’ve added chorizo (Spanish, or Portuguese if you can find it) but it is by no means necessary. In all honesty, this recipe — minus fish or sausage, plus beans or cauliflower — is just as authentic and enjoyable as a vegetarian main course or vegetable side dish.