That same gut-punch despair a 1970s mother felt upon discovering a copy of Playboy under her teenage son’s mattress I now feel when I come across a box of “flavor-blasted” Pepperidge Farm Goldfish in one of my children’s bedrooms.

Who is this child? I think. And when did he become a stranger? Because I certainly didn’t raise my offspring to eat … garbage. As I stand there, buzzing with denial and perplexity (When did he manage to sneak that thing into the house? Where did he even buy it?), I critically size up the graphic design of the box: its bright, overhyped enthusiasm so clearly fake; those once-innocent little goldfish now surging wildly across the label, too jacked up on flavor to even realize that they’re being exploited.

I guess flavor will do that to you. I should know. Much as I like to blame my husband for introducing garbage into our kids’ diets, I am not entirely innocent. Peter, bless him, readily accepts responsibility for making junk food seem fun. For a while, when the kids were younger, he’d go on processed-food shopping binges anytime I had to be out of town for more than a day. “Mommy’s going away! Guess what that means?” Powdered mini-donuts and nacho chips.

I didn’t harangue him for it; I’ve written here in the past that I believe a strict obsession with healthy food can quickly morph into its own kind of disease. But I must have gently raised my eyebrows. Then, a couple of years ago, he snapped out of his junky delirium, all on his own.

“What am I doing?” he said to me one evening as I unpacked from a voyage. “I don’t even like the way this stuff tastes. It’s creepy.” He used the word fake; he used the word pernicious. My eyebrows relaxed.

But, as I said, I am not blameless. Flavor has always been a driving principle of my cooking, and I am not above ratcheting up the butter-and-salt content to ensure maximum deliciousness. Or, for that matter, the soy-maple-ginger-garlic content — a combination so easy on the taste buds it deserves to be called “pernicious.”

Which brings me to an altogether different species of fish: the majestic salmon, prince among the finned, which has been blasted over the years not by chemically-manipulated flavor molecules, poor dear, but by industrial development and the resulting destruction of its various and vulnerable habitats. Nonetheless, salmon remains the second-most popular fish consumed in the U.S., after tuna. (Goldfish aren’t ranked.) Week after week, there   it is at the market, looking more or less rosy, more or less firm-fleshed, more or less like supper. My youngest adores salmon, so these days I buy it often. 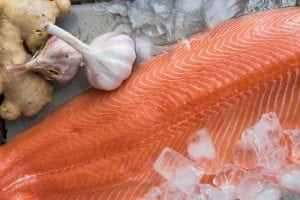 A blast of flavor (Photo by Henry Weed)

Last year, I had the good/bad fortune to stumble across an especially excellent salmon recipe. The original is on Food52, a cooking website, where it has received nearly 2,000 likes. I tried it and everyone raved. As in: “This is the best fish you’ve ever made.” So I tweaked it (the original seemed slightly off) and remade it, and again: raves. For a while, I tried interspersing this version of salmon with others I liked, but who was I kidding? Every time I came home from the farmers’ market with a filet of salmon, one child or another would say, “Oo! Are you going to make it the good way?”

As my 1970s forebears knew, a good recipe quickly becomes a prison, it’s very deliciousness setting a standard one feels compelled to meet, if not surpass, forevermore. It makes cooking a bit less adventuresome, a bit more rote. Unless, that is, you get a little crazy with the flavors, doubling this ingredient, concentrating that, fine-tuning the balance, cranking up the volume notch by notch until … well, OK: No. You don’t ever actually blast it, because that would just be immoral.


Heat the oven to 275 degrees. Cut the salmon into 1½ -inch wide slices. Place skin-side down in a roasting pan and set aside.

In a blender, combine the ginger, garlic, soy sauce and maple syrup and blend until smooth. Add the vermouth and mirin and blend to combine. Transfer to a small saucepan and bring to a boil; cook briskly, stirring occasionally, for about 10 minutes until reduced to the consistency of molasses. Stir in the lime juice.

Spoon about half the sauce over the salmon and transfer to the oven. Cook 20 to 25 minutes until the fish flakes gently when prodded. Sprinkle scallion over the top and serve with rice and the remaining sauce on the side. 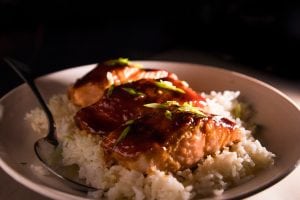