Bouncing back from their season-opening loss, the Vikings (U9 boys) were undeterred on April 22 versus the Peekskill Santos, who dominated the first half on their home pitch.

A successful penalty kick by Darwin Saquipay gave the Vikings an early lead, but the Santos replied with three consecutive goals to give themselves a 3-1 lead at the half. “Keep working and don’t give up,” was the halftime message from coach Ralph Moran and the Vikings heard it loud and clear. In the opening minute of the second half, Parker Larsen drilled a ball into the corner of the Santos goal, sending a message to the opposing team as well as his own Vikings: “This isn’t over.” 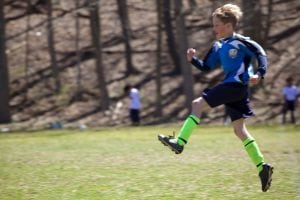 Parker Larsen celebrates after scoring for the Vikings. (Photo by Sheila Williams)

Parker score again to level the match and once more to give his team a 4-3 lead heading into halftime. The second half saw the Vikings defense kick into gear as well. Joseph DeMarco, Oliver Choi, Joey Smith and goalie Patrick Shields fought off Santos attacks while the Vikings offense continued to push up field. Another goal by Darwin Saquipay put the Vikings up 5-3 and Jack Fitzgerald scored to put the match out of reach.

The Santos scored once more before the match concluded with a well-fought 6-4 victory for the Vikings. Now 1-1-0, the Vikings next host the East Fishkill Extreme on Sunday, April 29, at noon.

The U-16 Philipstown Chargers made the long road-trip on April 22 to face off against the division scoring leaders, the Hyde Park Heat. Hyde Park was first to get on the board 8 minutes in, with the Chargers were playing a man down due to injuries and other conflicts. The Chargers defense led by Collin Eng-Wong, Quinn Petkus, Zack Maher, Luke Wimer, and Benjamin Strol did a great job subduing additional scoring chances in the first half, while the Chargers offense tried to get on the board.

The Chargers came on strong after getting a break at the half, with several great passes from middie Alek Maasik and Luke Hammond to wingers Will Stark and Kyle Mayo. Striker Frank Bentowski had a few near misses as the Chargers applied pressure. The lack of substitutions started to catch-up with the Chargers after a goalie miscue, with the score going 4-0 for the Heat.

Showing their perseverance and heart, the Chargers were eventually able to break through with a goal by Stark. As the game wound down, two Chargers had to rest due to injury. The team played for a while a man down, and the game ended 5-1 for the Hyde Park Heat. On April 29 the Chargers will take on Poughkeepsie at Philipstown Park.

The Boys U14 Philipstown Arsenal soccer team traveled to Haverstraw on April 22 to meet the Marsella Eagles.

The Eagles had bested their previous week’s opponent by seven goals and the Arsenal defense of Ezra Beato, Dan Carlos, Patrick DiNardo, Evan Maasik, Stephen Robinson, David Tacuri, Danny Urbanak and goalkeeper, Jake Piotrowski, would have their work cut out for them.

From the start of the game, it was clear that the Eagles were a fast, skillful team but the speedy Gunners’ defenders worked together to shut down the talented Eagles and the score at the half was Philipstown 0, Marcela 0. In the second half, middies Colin August, Tim Ben Adi, Jasper Drake, Ryan Eng-Wong and Chase Mayer continued to fight for possession and were able to develop opportunities on goal but the Marsella defense was able to regain control and move the ball back into Philipstown territory.

Late in the game, multiple Philipstown players suffered injuries and had to play a man down with only 10 on the field. The Eagles quickly capitalized on the mismatch and put a goal on the scoreboard. Next, a Marsella corner kick resulted in a header goal for the Eagles. Kudos to all the Philipstown Arsenal players who left it all on the field until the final whistle to keep the game close with the final score of Marsella 2, Philipstown 0.