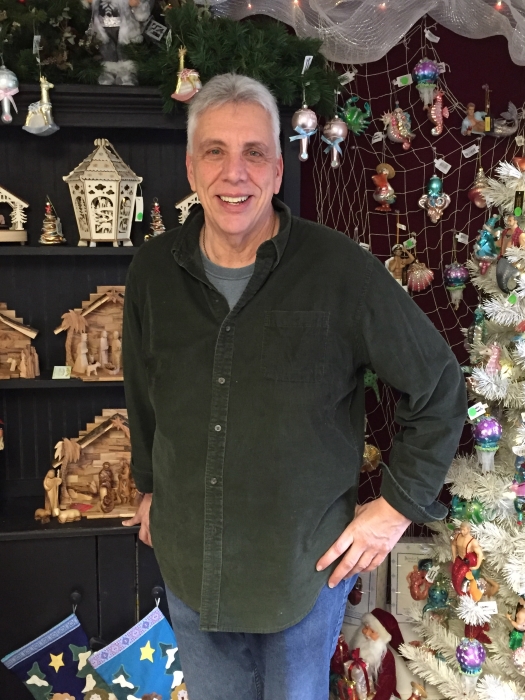 Ron Iarossi (Photo by A. Rooney)

Ron Iarossi owns the seasonal Kringle’s Christmas House in Beacon, which during most of the rest of the year is also the Beacon Creamery.

What do ornaments and ice cream have in common?

They represent something nostalgic — it takes people back. It’s a fun shop to run. We help people out. If they have a memory of an ornament from their childhood, we try to find one like it. We’re even open on Christmas Eve. It’s mostly men who come in then when they realize they’ve forgotten to buy something. Ice cream always sells, even during snowstorms. At this time of year, it’s mainly pints, not cones.

How did you get into selling ornaments?
It was something my wife and I dreamed of doing. We were always on the look-out for Christmas stores when we went on vacation. Twenty-six years ago, I was working for a bank in Connecticut which went under. We decided to make a change and opened a store in Fishkill, which we ran for three years. When we needed to expand, we found space in Beacon. We’ve moved a few times over the years, but all on Main Street.

Which ornaments are best-sellers?
Right now, it’s the Italian glass ornaments, which are a little more contemporary. Each part is individually blown and the assembly is labor intensive. Others are hand-painted but blown in a mold. There can be many painters working on a single ornament; one might specialize on the eyes, for instance.

Does your family trim a tree?

You know, having this business, it’s kind of whoever gets to it. I haven’t done it yet. Between being here, baby-sitting for my grandkids twice a week… Plus, I’ve been collecting ornaments for so long that we had to get a second tree to fit them all.

What makes Christmas special for you?
Well, I have five grandchildren under the age of 5; they’re all toddling around now and are able to pick out their own ornaments [at the store]. I used to choose them, but those days are over.