Howland to host evening of works by female composers

When Debra Kaye, a pianist and aspiring writer of music, came from Atlanta to New York City to study at the Mannes School, “there weren’t any female composers to model myself after,” she recalls.

Much has changed in the intervening decades. To honor Women’s History Month, the Howland Cultural Center on Saturday, March 9, will host a concert, Reclaim the Night, featuring works by female composers (including Kaye, who has lived in Beacon since 2006). Kaye will also perform, along with violinists Mioi Takeda and Lynn Bechtold (as Miolina) and soprano Kelly Ellenwood.

The concert’s title is from a song by Peggy Seeger, the daughter of Ruth Crawford Seeger and half-sister of Pete Seeger. Besides Kaye, the show will include compositions by Bechtold, Valerie Coleman, Emma Logan, Jessica Meyer, Elena Ruehr and Pauchi Sasaki. 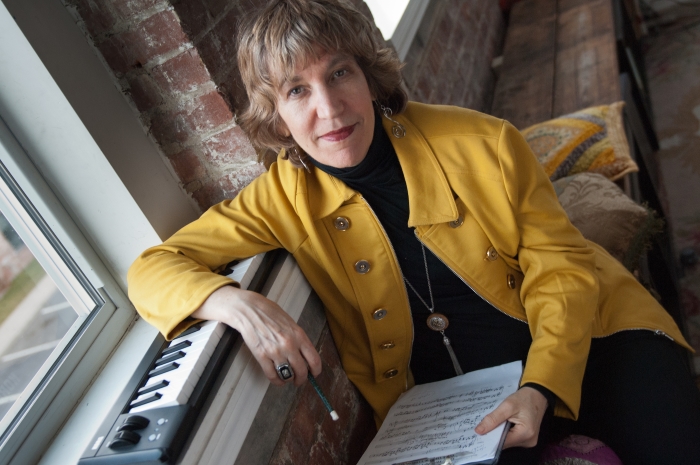 Kaye’s catalogue of nearly 50 pieces includes chamber and orchestral music, art songs, choral and theatrical compositions. She has been recognized by the American Society of Composers, Authors and Publishers for her “creative contributions to American music,” and her works have been performed at Carnegie Hall and around the country.

During the 2017-18 season Kaye wrote a string quartet commemorating the 25th anniversary of the Howland Chamber Music Circle, and in 2016 she was commissioned by BeaconArts to set Margaret Fuller’s “Freedom and Truth” to music for the dedication of a marker for the poet at Polhill Park.

Kaye says it’s “a great time for American composers and American music. Funding is hard, the pot is smaller, but there are a lot of passionate people doing it.”

The first first female composer she met was a friend of her family. “She alerted me that it was possible, and once that happened, it became a joyful journey for me,” Kaye recalls. “I no longer felt chained to the piano.”

She began to experiment. “I wrote a lot of things that were semi-improvised and written for me to perform with others,” she says. “I worked with my friends; sometimes there were conga players, with me on synth. I composed a piece inspired by a series of 64 small paintings someone had done. I’d love to hear it again now, but in the spirit of those times, it was recorded only on a cassette, long gone.”

After briefly moving to the Pacific Northwest, Kaye returned to New York City more mature, invigorated and focused on composing. “I started learning more by listening to others play my work,” she says. As she became more experienced, Kaye felt more at ease writing for ensembles.

Asked to describe her process, Kaye responds: “Sometimes a whole swath of music comes into my head. Then I step back and take the needed time to gain perspective on that, and then I refine it. I sometimes alter it again after hearing it live for the first time, with the real instruments being played. Something internal is now a shared experience. That can be both exciting and scary.

“Most of the time the changes are about the subtleties, the little markings,” she says. “For example, in a string quartet which I wrote, when I heard the musicians perform the piece, they didn’t go all-out, and I realized I needed to write andante appassionata [moderately slow tempo, with passion]. The more specific, the better, especially with dynamics.” Kaye often works on two pieces at once; if she reaches a standstill with one, she can turn to the other.

Tickets to Reclaim the Night are $15 at brownpapertickets.com or $20 at the door. The Howland Cultural Center is located at 477 Main St.